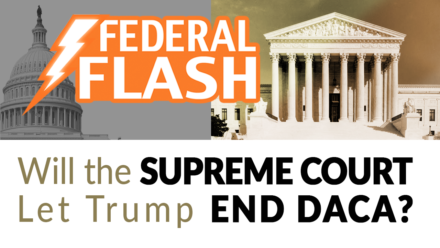 Last week, the U.S. Supreme Court heard arguments on the Deferred Action for Childhood Arrivals (DACA) program. Will the Court allow President Trump to phase it out?

This episode of Federal Flash considers that question. It also provides updates on the Federal Communications Commission’s efforts to alter E-rate funding and the U.S. Department of Education’s advice to chief state school officers on implementation of the Every Student Succeeds Act.

Last week, the Supreme Court heard oral arguments in consolidated cases regarding the fate of nearly 700,000 young Americans, referred to as “Dreamers,” who were brought to the U.S. as undocumented children.

Two years ago, the Trump Administration announced that they would phase out the Deferred Action for Childhood Arrivals, or DACA, program. Since it initiated in 2012, approximately 800,000 young people have applied for DACA, which provides work permits and protection from deportation to qualified young undocumented immigrants.

Individual DACA recipients, universities, civil rights groups, and businesses have challenged the Trump Administration’s plans to phase out DACA, and won. Lower courts found that the Administration relied on faulty legal analysis to end the program. Many briefs have been filed in what is expected to be one of the Supreme Court’s most-anticipated rulings of the term.

Many predict a 5-4 ruling in favor of the Administration based on the oral arguments heard last week. We will keep viewers posted on this very important ruling, which is likely to be announced at the end of the Court’s term next summer.

For resources regarding understanding and protecting the rights of Dreamers in schools, visit: tinyurl.com/studentswithoutstatus.

Senators Stand Up for E-Rate

At the end of October, Senators Murkowski and Sullivan, Republicans from Alaska, joined with Senators Schatz and Hirono, Democrats from Hawaii, to urge Federal Communications Commission Chairman Pai to end his efforts to alter the way E-rate and the Rural Health Care program are financed.

Our viewers may recall that the FCC is proposing an overall spending cap on programs in the Universal Service Fund, or USF, including E-rate, and the Rural Health Care program.

While Chairman Pai believes an overall cap will make the programs more efficient, the Senators disagreed, stating it will create an artificial budget crisis and encourage the FCC to favor certain programs.

All4Ed agrees with the Senators and worked with our Future Ready Schools network to collect signatures on a letter from more than 100 school and district leaders from 38 states opposing the FCC’s proposal.

While much of Capitol Hill is focused on the impeachment hearings, funding is also set to expire for the U.S. Department of Education and other federal agencies on November 21. As a reminder, the House approved fiscal year 2020 funding for the Education Department over the summer, but the Senate’s spending bill has stalled.

To avoid a government shutdown, congressional leaders are expected to vote on a short-term continuing resolution this week, which would extend funding through December 20. The stop-gap funding measure, however, could set up a contentious vote later in the year, given that the December deadline could interact with anticipated House votes on impeachment.

One last note. The U.S. Department of Education recently sent a letter to Chief State Schools Officers offering advice on the continued implementation of the Every Student Succeeds Act.

The letter sets a deadline of February 3 for amendments to state plans that would impact accountability determinations for the 2020-2021 school year.

The letter also addresses the importance of identifying three “discrete” categories of schools for comprehensive, targeted, and additional targeted support. It further discusses the timeline for school identification and reporting provides resources and links to technical assistance.

This blog post represents a slightly edited transcript of the November 19 episode of Federal Flash, the Alliance for Excellent Education’s video series on important developments in education policy in Washington, DC. The video version is embedded below. For an alert when the next episode of Federal Flash is available, email at alliance@all4ed.org.