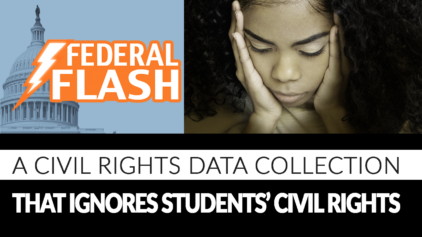 New Civil Rights Data Collection (CRDC) findings were released, but the U.S. Department of Education (ED) isn’t talking about what the data means for students of color. Plus, Senate Republicans fail to pass their “skinny” COVID-19 stimulus package as a more comprehensive deal eludes the White House and House Democrats. With prospects for an agreement prior to the election fading, will schools ever get the relief they need?

Last week, ED released findings from the long-delayed 2017–18 Civil Rights Data Collection, a biennial survey of the nation’s public elementary and secondary schools. ED’s analysis focuses on two areas: (1) reports of sexual violence and (2) the use of physical restraint and seclusion against students.

Specifically, elementary and secondary schools reported a more than 50 percent increase in reports of sexual violence during the 2017–18 school year compared to the 2015–16 school year. The agency’s Office for Civil Rights (OCR) said it is unclear what drove the increase in reported allegations. Additionally, the report highlights that students with disabilities—and specifically Black students with disabilities—were disproportionately subject to seclusion and restraint.

Unfortunately, that is one of the only findings that focuses specifically on the school experiences of students of color. While the CRDC includes many data points that can be used by advocates and researchers to uncover inequities in the nation’s schools, the Office for Civil Rights provided next to no explanation of what the data means for Black and Latino students, reinforcing a troubling trend from this administration.

In a statement, Alliance for Excellent Education (All4Ed) President and CEO Deb Delisle explained, “After taking far too long to release this information, the Trump administration did so without providing much-needed analysis to go along with millions of data points. This follows an insidious history of this administration’s denials of systemic racism, ranging from their rescission of OCR’s guidance on school discipline and school integration, to the recent executive order prohibiting federal agencies and contractors from engaging in trainings that promote diversity.”

As we covered before on Federal Flash, ED delayed the latest CRDC by a year, citing uncertainty and unreliability of data collection due to the coronavirus, and also is planning to cease collecting a number of critical equity data points, including questions related to school funding and experienced educators. We’ll keep you posted on these efforts.

With time slipping away to strike a deal on a COVID-19 relief package before the election, Senate Republicans tried again to pass a “skinny” version of their stimulus bill, the Health, Economic Assistance, Liability Protection, and Schools (HEALS) Act. As a reminder, this proposal has a lower $500 billion price tag than the $2.2 trillion Health and Emergency Recovery Omnibus Emergency Solutions (HEROES) Act passed by House Democrats. The Senate plan also includes less relief for education: $70 billion for public and private schools, with two-thirds of that contingent on schools offering in-person classes. However, Democrats blocked the measure, and it failed to pass the Senate floor.

In the meantime, House Speaker Nancy Pelosi (D-CA) and U.S. Treasury Secretary Steven Mnuchin continue work on a more comprehensive bill, but major sticking points remain. As we covered onFederal Flash, President Trump abruptly sidelined negotiations with Democrats after they unveiled the new HEROES Act earlier this fall. But conversations restarted just a few days later after the President got an earful from Republican lawmakers who were wary of abandoning action to boost the economy in an election year.

Although Pelosi and Mnuchin have made progress on some fronts, such as provisions related to COVID -19 testing, many Senate Republicans remain opposed to a large $2 trillion stimulus. Moreover, the White House and Democratic leaders continue to disagree over provisions related to liability protections for employers and the amount of aid for state and local governments. Unfortunately, much-needed aid to schools is left hanging in the balance.

Even if the parties can come to agreement, at this point, there simply aren’t enough days left on the legislative calendar to draft and pass a bill before election day. The prospects for legislation during the lame duck session will depend on the outcome on November 3 and which party controls the White House—and Congress—moving forward.

This blog post represents a slightly edited transcript of the October 23 episode of Federal Flash, All4Ed’s video series on important developments in education policy in Washington, DC. The podcast and video versions are embedded below. For an alert when the next episode of Federal Flash is available, email alliance@all4ed.org.