What Biden’s Win Means for Education 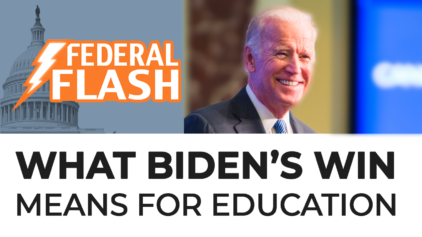 Joe Biden and Kamala Harris will be the next president and vice president of the United States. Meanwhile, Republicans gained ground in the House of Representatives and are favored to hang onto their Senate majority, but it is unclear who will replace retiring Senator Lamar Alexander (R-TN) in leading the education committee. Today, we break down what the 2020 election results mean for students and schools, including new stimulus funding and priorities for the U.S. Department of Education (ED).

With the highest voter turnout in a century, Joe Biden and Kamala Harris decisively won the popular vote and secured at least 279 electoral college votes to become the forty-sixth president and the first female, Black, and Indian American vice president. Among other priorities, the Biden administration is expected to seek increases in education funding and place strong emphasis on protecting students’ civil rights, a welcomed change from the Trump era.

In a statement, Alliance for Excellent Education (All4Ed) president and CEO Deborah Delisle said, “For four years, educational equity and civil rights protections have been intentionally eroded, and we look forward to swift action from the new administration on policies that ensure that every student—no matter his or her race, religion, background, or ZIP code—can thrive.”

Though Democrats took back the White House, they will likely have at least two more years in the Senate minority, picking up only one seat. However, there’s an outside chance that, come January, the Senate will be split 50-50 pending the outcome of runoff elections for both Georgia Senate seats. In that case, Vice President-Elect Harris would be the decisive tiebreaker vote. Meanwhile, Democrats held onto the House, but their majority narrowed.

With President-Elect Biden facing a divided Congress, the immediate focus returns to if—and when—the two parties will come together to negotiate further COVID-19 relief. Following the election, Senate Majority Leader Mitch McConnell (R-KY) declared a stimulus bill will be a priority during the lame duck session. However, if past attempts are any indication, negotiations will not be easy, as many expect Republicans to push for cutting government spending during a Biden administration.

As we covered before, there is more than $1.5 trillion between the latest Senate proposal and House Democrats’ Health and Economic Recovery Omnibus Emergency Solutions (HEROES) Act. Moreover, the difference in education funding is stark: just $70 billion in the Senate plan compared to $175 billion in the HEROES Act. The Senate bill also would tie two-thirds of funding to schools reopening and has no funding for home internet connectivity, compared to $12 billion that Democrats provided.

If both sides cannot come together soon, it will be up to the new Congress. President-Elect Biden promoted the original HEROES Act, calling on Republicans and Trump to support it. In his school reopening plan, Biden also suggests that Congress pass a separate $30 billion emergency package to ensure schools can reopen safely and called for an additional $4 billion to upgrade technology and broadband. And unlike President Trump and Republican lawmakers, Biden would not condition funding on districts offering in-person classes. Instead, he has said his administration will issue national guidelines for reopening based on the level of viral spread in a community and would leave decisions of when to reopen schools up to state, local, and tribal officials.

A Biden presidency also will steer education policy in a different direction by pushing for more funding and focusing on initiatives that have gotten little attention from the Trump administration. While we can only speculate as to who will be Secretary of Education, Biden promised to nominate a former classroom teacher. We also can look to the campaign to see what some of the new secretary’s priorities will be. For example, Biden has pledged to triple Title I funding to help raise teacher salaries and increase student supports including school psychologists, counselors, nurses, and social workers, especially in high-poverty schools. Additionally, he called for universal prekindergarten, free community college, and doubling the size of the Pell Grant.

Unlike these budget requests, which require congressional approval, Biden has pledged executive action to reverse the Trump administration’s approach to students’ civil rights, reissuing Obama-era guidance to curtail racial disparities in school discipline, protect the rights of transgender students, and improve racial diversity in colleges and K–12 schools. The new administration also has promised to extend protections for Deferred Action for Childhood Arrivals (DACA) recipients, though a permanent fix would require legislation.

It is less clear whether the Biden administration will modify guidance issued by Secretary Betsy DeVos to maintain statewide assessments and accountability this spring. While Biden’s platform was critical of the use of standardized tests for high-stakes purposes, prominent civil rights groups and Democratic lawmakers supported DeVos’s decision to administer assessments this spring to help shine a light on inequities exacerbated by the pandemic and potential learning losses.

Over on Capitol Hill, House education leadership will remain stable while the makeup of the Senate Education committee is in flux. Health, Education, Labor, and Pensions (HELP) Committee Chairman Lamar Alexander (R-TN), as well as Mike Enzi (R-WY) and Pat Roberts (R-KS), are retiring. Additionally, although Susan Collins (R-ME) won her reelection contest, Kelly Loeffler (R-GA) is heading into a runoff against Democratic challenger Raphael Warnock. On the Democratic side, Doug Jones (D-AL) lost his reelection bid.

Assuming Republicans maintain their Senate majority, Richard Burr (R-NC), is next in line to serve as chairman, followed by Rand Paul (R-KY). Burr, however, plans to retire in 2022 and is facing a federal investigation for stock trades he made during the pandemic. While Alexander and Burr often have been aligned in their views on education, if Burr declines the chairmanship, Paul would bring a much more significant—and conservative—change in leadership. For example, Senator Paul voted against the Every Student Succeeds Act and believes the “existence of the Department of Education is an overreach of constitutional authority.” Paul also has supported legislation to promote private school vouchers, prohibit the federal government from placing conditions or requirements on education funding, and eliminate standardized testing.

Given both Georgia runoffs and uncertainty over Burr’s plans, it may be a while before we know who will join Patty Murray (D-WA) in leading the HELP Committee in the next Congress. We’ll keep you posted.

This blog post represents a slightly edited transcript of the November 9 episode of Federal Flash, All4Ed’s video series on important developments in education policy in Washington, DC. The podcast and video versions are embedded below. For an alert when the next episode of Federal Flash is available, email alliance@all4ed.org.