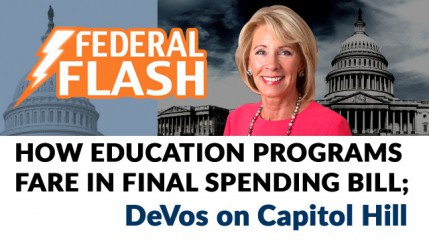 Federal funding for education takes center stage in this week’s Federal Flash, with Congress reaching a deal to fund the government through September 30 and Secretary of Education Betsy DeVos testifying on the Hill.

Congress has agreed to a $1.3 trillion appropriations bill to fund the government though September 30.  Funding for the government was set to expire at midnight tonight, but Congress moved quickly to pass the bill and avoid another government shutdown.

Overall, Congress increased funding for the Department of Education by $3.9 billion. Among the increases were:

A number of programs that President Trump proposed to cut were maintained in this bill, including Title II state grants for teacher professional development and comprehensive literacy development grants.

One important policy missing in all these pages is a resolution to the fight over immigration policy.

Despite support from educators and school leaders across the country, the bill did NOT include a legislative fix for DREAMERs, or students who were brought here as children but who have not attained legal status as citizens.  We will continue to report on Congressional action to protect these students from deportation.

President Trump issued a veto threat via Twitter on the morning of March 23, saying, “I am considering a VETO of the Omnibus Spending Bill based on the fact that the 800,000 plus DACA recipients have been totally abandoned by the Democrats (not even mentioned in Bill) and the BORDER WALL, which is desperately needed for our National Defense, is not fully funded.”

The tweet left open the possibility of a government shutdown. While many on the Hill considered this twee to be mostly smoke and mirrors, at the time this Flash was filmed it was unclear how things would play out, especially considering that most lawmakers have already left Washington for a two-week recess. (Ultimately, President Trump signed the bill.)

As Congress was putting the finishing touches on the fiscal year 2018 budget, Secretary DeVos testified before House appropriators on the Department’s budget for fiscal year 2019.

Members of the Committee asked the Secretary a range of questions, touching on school safety in the light of the shootings in Florida and Maryland, racial disparities in suspensions and expulsions, impact aid, and science, technology, engineering, and math education.

Nothing notable out of the hearing other than there wasn’t much, if anything, that Democrats and the Secretary could agree upon.  And there wasn’t much, if anything, Republicans were willing to disagree and or press her on. If you support Secretary DeVos, you probably thought she fared well and stayed on message. If you don’t you were probably left feeling frustrated by some of her answers.

Video of the hearing is available at https://www.c-span.org/video/?442744-1/secretary-devos-testifies-fiscal-year-2019-budget-request.

Finally, tomorrow, March 24, thousands of students and their supporters are expected to descend upon Washington, DC in the March for Our Lives.

Born out of the student movement following the shooting in Parkland, this march follows student protests outside of the Florida state capital and the National School Walkout on March 14.

The Alliance for Excellent Education supports every student and American across the country fighting for common-sense measures to keep our nation’s school children safe.

Visit this link to read All4Ed’s statement on Gun Violence in America’s Schools and Communities and to find out how to support the March on Saturday.

This blog post represents a slightly edited transcript of the March 23 episode of Federal Flash, the Alliance for Excellent Education’s five-minute (or less!) video series on important developments in education policy in Washington, DC. The video version is embedded below. For an alert when the next episode of Federal Flash is available, email at alliance@all4ed.org.