Future Ready with a Library Voice

This is blog is a repost from Jamie Locklin’s Blog. 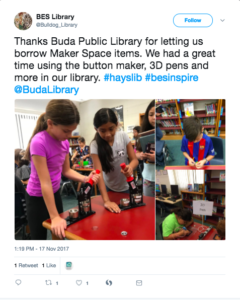 I came into my current position as the Director of Digital Learning three years ago. My task in that first year seemed monumental as I was to serve 1,400 teachers and approximately 19,000 students in 23 schools with just four digital learning instructional coaches. The task seemed overwhelming so I quickly got to planning and designed a plan to split these campuses amongst myself and my coaches and get to the task of influencing pedagogy with technology.

About six months into the year I did an assessment of opportunities district-wide to expand my department’s influence with the teachers around the district. The ground was ripe for influence and change but I just did not have the capacity on my team of four to make it happen in a timely manner that made sense for our district. In my assessment I quickly discovered that the one group in our district that was under represented was our libraries and librarians.

A year previous the district had retired the position of a district or central librarian and our librarians were set to the task that school year to move forward with only leadership from their principals but no collective representation at the district level. These librarians were serving their schools with 100% passion, creativity and zeal, but collectively they had no voice to speak up for their changing position and aging collections. It was like watching a ship with no engine or rudder. Everyone had their proverbial nose to the grind, but the ship was still just floating along waiting for either a miracle to happen or disaster to strike.

I began to talk to the librarians district-wide and discovered that a pervasive worry about their profession was apparent. They had watched and listened as districts around us hired teachers instead of librarians with masters degrees, or they replaced librarians with paraprofessionals and kept a few central librarians to rotate to schools. They had seen as their book budgets were not increased and supply budgets had been cut. The move to retire our district level librarian had made them feel insecure in their position and future, not just with the school district, but as a profession nationally as they perceived the trend was growing stronger. To be honest, I had not even noticed it happening until I began to look.

And that’s when inspiration struck me, while getting to know the librarians, I had also discovered a wealth of knowledge about instruction and technology that had gone relatively untapped. I saw the puzzle coming together so I went to my boss and asked to have libraries put under the Digital Learning department so that we could begin to influence schools from the inside out instead of the outside in. I expected an excited yes because it just made sense. All I needed to do was to paint the right picture and it would be obvious, but instead was met with a resounding not now.

Frustrated at what I thought was a great idea being rejected, I began looking for a new angle to spread influence. I came across the Future Ready movement and took to it almost immediately. The plan was beautifully thought-out and designed with assessments for the district that would help reveal the issues that I could see facing our future as a district. This movement of leadership for districts to become prepared for the future spoke to my soul.

I quickly took the information to my boss and then to the Superintendent who signed the Future Ready Pledge and agreed that we needed more depth to our plans to be ready for what was coming. We signed up for a Future Ready Institute in Austin that summer and I anxiously awaited the date!

Once at the Summit it was clear that, even though we had our Superintendent, Chief Technology Officer, Chief Academic Officer, and the Director of Digital Learning all in the same room, we were truly under-prepared to take on this future ready movement. More decision makers would be needed then just those in the room around that table. More influencers would need to be engaged and more time would be needed to embrace such a future-facing planning time. A plan did birth out of the institute to use the work we did over those two days as a springboard for future planning, but the overall movement was not going to work like it was designed to for where we were as a district.

I will readily admit that as we worked through the Future Ready Framework over those two days I grew discouraged, wondering how I was going to help move our district towards future-readiness. My heart sank and anxiety over whether or not I could actually “lead up” caused me to doubt my effectiveness in my position. Just as I was beginning to be resigned to my fate, the clouds of angst parted as Carolyn Foote took the stage (with others, but I can’t remember who else) to talk about a new Future-Ready strand, Future Ready Libraries.

As Carolyn spoke of the Future Ready Library Framework, I was like Harry Potter discovering the Marauders Map. I could see clearly where everything was and where it fit. Next steps and paths seemingly appeared out of nowhere as each area of the framework merged with my mission in digital learning. The leadership gods had gifted me not just a plan, but a visually compelling plan. A plan that made 1000% sense to everyone who looked at it.

Without regard for my own well-being, I turned to my boss and lept at the opportunity, like a tiger to meat, and said, “This! This is why I want the librarians in the district to be under the Digital Learning Department.” With the wave of clarity and the presentation that day, there was no counter argument to be made and suddenly, I had a path forward with the librarians in my department.

That summer I quickly contacted Carolyn Foote and Shannon Miller as I dove head first into the framework and began to plan PD. Carolyn is local to me so she agreed to come visit with our librarians, and Shannon agreed to a Google hangout presentation with our team. The plans were in place, and now this guy with no library background, was going to be leading a group of 21 librarians into the future.

Librarians returned to work to an event of my making called LibraryCon. There, they were introduced to myself and the FRL framework. We began to ask questions and explore the framework and what it meant for their libraries. A new vision of libraries was in genesis, forming in that moment, for all of us to experience together. I promised a strong voice at the district level, one that would elevate their value using the FRL framework as a guide to influence leadership at their campus and district levels. I met one-on-one with each principal district-wide to go over the framework. I presented the framework to all campus and district administrators at a district-wide event declaring it a new day for the libraries and librarians of our district. The FRL framework was presented to our board and became the official plan for our libraries.

As the year progressed we took one month to explore one area of the framework rotating through all 10 sections. Carolyn Foote and Shannon Miller led some credibility to the process and helped our librarians envision what it looked like to be a future ready librarian. Principals began to embrace the framework and began encouraging their librarians to do more, and to engage teachers outside of the library space. Momentum was built and the value of the library and librarian was beginning to sky rocket in our district.

With a voice given to our librarians, things began to happen.

We added a stipend to have two lead librarians help me through this process in the first year. Our 2017 bond committee listened as I showed them the issues facing our libraries with aging collections, outdated furniture, ruined carpets, and spaces in need of a general overhaul. The committee generously approved over $1.7 million dollars to meet these needs. Our librarians gained professional respect from their colleagues who began to look to them for training and advice. The use of technology in the classroom (the real reason why I embarked on this journey) increased immensely as teachers saw librarians using resources to help organize and teach like Google Classroom, Google Sites, Google Calendar and the other G-suite tools. Makerspaces were piloted (year one) and then funded in the budget and bond (year two) so that students can express their creativity in the library with many forms of expression that vary campus-to-campus. Librarians are running facebook groups for parents and for teachers to communicate and see what is happening in the library spaces at each school. We have partnered with our community via our local public library who checks out Makerspace items that we could not yet afford at our campuses which allows our students greater depth of experience in their creation (hello button makers). And so much more!

My journey with the future ready library framework has been one that I could not have expected or predicted. The framework unlocked the doors to the future for our libraries and for our librarians. The leadership of our district and our community has increased the value of our library system to the point of our librarians and our library spaces have become central, indispensable parts of our campuses. All of this because of the thoughtful planning and work of the Future Ready Library team including Mark Ray, Shannon Miller, Carolyn Foote, Follett and the Alliance for Excellent Education. I, for one, am grateful. 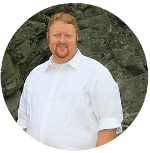 Jamie is father of five wonderful children who is a Google Certified Trainer with a Masters in Education Technology from Azusa Pacific University. In his current role as the Director of Digital Learning in Hays CISD, he comes beside administrators and teachers in both 1-on-1 and PLC environments to help set and achieve goals to combine the best of classroom pedagogy with the 21st-century tools of today. Connect with Jamie on twitter at @jamielocklin and #hayslibs

This is blog is a repost from Jamie Locklin’s Blog.