WASHINGTON, DC – In conjunction with today’s White House Next Gen High School Summit, a new report finds that the number of high school dropouts decreased from 1 million in 2008 to approximately 750,000 in 2012. The report, released today by the Alliance for Excellent Education, America’s Promise Alliance, Civic Enterprises, and Everyone Graduates Center, also finds that the number of “dropout factories”—high schools where less than 60 percent of students make it to their senior year—declined from 2,007 in 2002 to 1,040 in 2014. 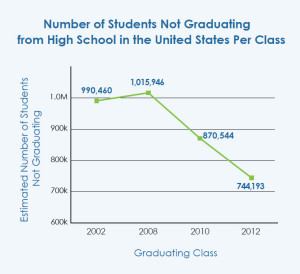 Progress Is No Accident: Why ESEA Can’t Backtrack on High School Graduation Rates credits the improvement in high school graduation rates to state and local on-the-ground efforts, as well as federal requirements issued in 2008 and 2011 targeted at the dropout crisis—the same requirements that are absent from current efforts to rewrite the Elementary and Secondary Education Act (ESEA), currently known as No Child Left Behind Act (NCLB).

“Every district and school we visit where graduation rates are rising, we hear a similar refrain: an every-student-counts culture with real accountability for progress over time,” said John Bridgeland, chief executive officer of Civic Enterprises. “This is a core element of the secret sauce to get to a 90 percent graduation rate for all.”

“High school graduates earn, on average, $15,000 more annually than dropouts,” Wise said. “That’s great news for the individual graduates but also for the economy, as additional earnings are not going under a mattress; they will be used to purchase automobiles, homes, groceries, clothing, and more, fueling state and local economies.”

“To keep the momentum going, close the graduation gaps that still exist, and reach the GradNation campaign goal, state accountability systems must continue to be a priority,” said John Gomperts, president and chief executive officer of America’s Promise. “Recent gains in graduation rates show us that when states and schools are held accountable and students are given the support they need to stay in school and on track to graduation, real progress is possible.”

America’s Promise leads an alliance of organizations, communities, and individuals dedicated to making the promise of America real for every child. As its signature effort, the GradNation campaign mobilizes Americans to increase the on-time high school graduation rate to 90 percent by 2020 and prepare young people for postsecondary enrollment and the twenty-first century workforce. www.AmericasPromise.org

Civic Enterprises is a public policy and strategy firm that works with corporations, nonprofits, foundations, universities, and governments to develop innovative initiatives and public policies in the fields of education, national service, civic engagement, conservation, public health, and more. It works with organizations that seek to challenge the status quo and grow their impact for the greater good. www.civicenterprises.net

The Everyone Graduates Center, School of Education at Johns Hopkins University, is a research and action center that focuses on understanding who graduates high school in America, and the characteristics of students, schools, communities, and states that are making progress and those that are not. Seminal work includes Locating the Dropout Crisis, a 2004 report pinpointing the number and locations of the nation’s “dropout factories” and bringing the dropout challenge to the nation’s attention. The research and its dissemination underpin the second half of the center’s work—development and advancement of models and tools, including Early Warning Systems to identify off-track students as early as the sixth grade, accompanied by interventions to get students back on track. The center works with states, districts, schools, universities, and “think tank” partners. www.every1graduates.org

Statement from Deborah Delisle, President and CEO of the Alliance for Excellent Education, on the Budget Resolution