“The federal government has made strong, worthwhile investments in the bookends of education—early education and postsecondary education—but it missed the middle,” said Gov. Bob Wise.

WASHINGTON, DC – Academic performance in middle school and the early high school years are critical turning points in whether students ultimately graduate from high school, yet a new report released today from the Alliance for Excellent Education reveals that federal funding largely ignores these years of a child’s education. In fact, this “missing middle” in federal education funding leaves middle and high schools receiving tens of billions of dollars less than early education and postsecondary education, according to Never Too Late: Why ESEA Must Fill the Missing Middle. 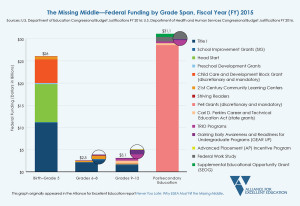 Statement from Deborah Delisle, President and CEO of the Alliance for Excellent Education, on the Budget Resolution