WASHINGTON, DC –The academic needs of large numbers of African American and Latino students, students from low-income families, English language learners, students with disabilities, and other groups of traditionally underserved students in twenty-seven states and the District of Columbia could be ignored under a new proposal from the U.S. Department of Education (ED), according to a new report by the Alliance for Excellent Education.

“A high n-size could mean ‘no action’ for many students, especially students of color and students from low-income families who make up roughly half of all K–12 students yet graduate from high school at rates much lower than other students,” said Alliance for Excellent Education President Bob Wise. “A state with a high n-size will not notice when a particular group of students underperforms or fails to graduate from high school. As a result, no action will be taken and no resources will go to the school to help the students who are falling behind.”

Currently, however, only thirteen states set an n-size of ten or fewer students, the report finds. As shown in the graphic below, nine states and California’s nine CORE districts, which include the state’s largest school districts, set the n-size between eleven and twenty students. (For a larger version of the graphic, visit https://all4ed.org/wp-content/uploads/2016/06/N-SizePyramid_FINAL.png .) 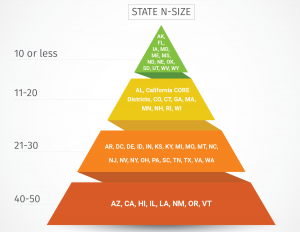 Under proposed rules that ED released last week, states would be permitted to set any n-size they want, but if it is larger than thirty, the state must include the number and percentage of schools that will not be held accountable for the performance of students in a particular subgroup.

Download Ensuring Equity in ESSA: The Role of N-Size in Subgroup Accountability at https://all4ed.org/reports-factsheets/n-size/