Federal Flash: What’s in the New Bill to Rewrite the Higher Education Act? 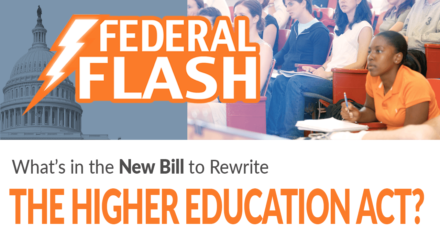 House Democrats introduced legislation to rewrite the Higher Education Act while the Trump administration worked on regulations that could increase segregation in schools and decrease the number of students receiving free and reduced-price lunch.

Chairman Bobby Scott of the House education committee introduced legislation this week to rewrite the Higher Education Act or HEA. If you’re not familiar with it, HEA is the federal law that governs higher education and sets parameters for things like the federal student aid program, including repayment plans, Pell Grants that help pay college costs for low-income students, and the Free Application for Federal Student Aid, aka the FAFSA.

While the bill earned accolades from several education organizations, not everyone was thrilled. Virginia Foxx, the leading Republican on the House education committee, said, “this bill does not address the underlying issue of exploding college costs. In fact, by increasing burdensome requirements and bureaucratic red tape the Democrats’ bill will contribute to rising college costs.”

The College Affordability Act differs significantly from legislation introduced in the Senate by education committee chairman Lamar Alexander. Alexander’s bill is a mere 169 pages and offers a piecemeal approach, not a comprehensive HEA reauthorization. It is also more modest. For example, Chairman Scott’s bill would increase the Pell Grant by 500 dollars and index it to inflation. Chairman Alexander’s bill would only increase the Pell grant by 20 dollars.

Information on the College Affordability Act is available here: https://edlabor.house.gov/the-college-affordability-act-facts.

The House education committee likely will pass the bill within the next few weeks, with the full House taking up the bill later this calendar year. It is unclear how action in the House will impact the Senate, where things are moving much more slowly. We’ll keep you posted.

While Congress works on HEA, the Trump administration is busy on the regulatory front. Today was the deadline for comments on a proposed rule to change the disparate impact standard used by the Department of Housing and Urban Development and many other agencies to prevent discrimination. The administration’s proposal would make it more difficult to prove that discrimination is taking place and advocates, including the Alliance for Excellent Education, fear this could increase segregation in housing and in schools. In a letter opposing the proposed rule, All4Ed president Deb Delisle said: “Federal policy should be a tool for increasing equity. This proposed rule would increase the alarming degree to which historically underserved students attend schools that are racially isolated and inequitably resourced.”

The Trump Administration is also working on regulatory changes that would affect the national school lunch program. Children in families that receive food stamps, formally known as the Supplemental Nutrition Assistance Program or SNAP, are automatically eligible for free school meals without having to fill out additional paperwork. But the Administration’s proposal to change eligibility rules for SNAP would decrease the number of children automatically certified as eligible for free school meals. This week, after prodding from Chairman Scott, the Trump Administration revealed: “as many as 982,000 children would no longer be directly certified for free school meals…” and reopened its public comment period on the rule change.

This blog post represents a slightly edited transcript of the October 18 episode of Federal Flash, the Alliance for Excellent Education’s video series on important developments in education policy in Washington, DC. The video version is embedded below. For an alert when the next episode of Federal Flash is available, email at alliance@all4ed.org.