Federal Flash: How Will the Election Results Affect Education? 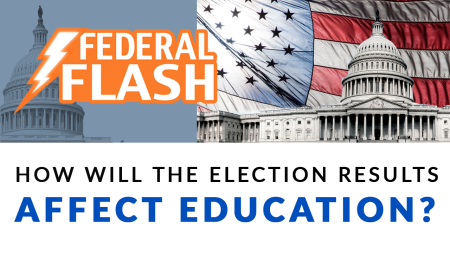 The results of this week’s midterm elections mean changes for federal education policy. But just how big will these changes be?

Today’s Federal Flash covers shifts in the House and Senate, as well as what a change in leadership could mean for an array of concerning polices coming from the Department of Education.

Changes in the House

Big changes will take place in the House education committee when the next session of Congress begins in January. First, the Committee will have a new chairman – and that new chairman, Representative Bobby Scott, could hardly be more different than the current Chair, Virginia Foxx. Mrs. Foxx does not believe there should be a federal role in education. She is quick to remind people that “there are 4,543 words in the Constitution. Not one of them is the word ‘education,’ or a synonym for it.”

Mr. Scott sees things very differently. To him, the federal government has a very important role to play in education policy from a civil rights perspective. As one of the authors of the recently passed Every Student Succeeds Act, his top priority was making sure the law included protections and support for historically underserved students.

Who sits in those seats is also going to change. On the Republican side, six out of the 22 members will not be returning to the House next January. This includes Representative Jason Lewis who is a supporter of dual enrollment as well as Representative Lou Barletta who is a champion for after-school programs.

On the Democratic side, none of the members lost their elections, but they may not all stay on the Committee. Instead, their seats may be filled by new House Democrats as the education committee is often where freshman members get placed. We’ll know soon as committee rosters are developed over the next several weeks.

Changes in the Senate

In the Senate, the outlook for Democrats is very different because Republicans not only maintained control of that chamber, they’ll likely expand their ranks. That means that the ratio between Republicans and Democrats may change slightly to give even greater weight to the majority party. Currently, there are twelve Republicans and eleven Democrats on the committee. In January, that could change – either Republicans could be added, or the number of Democrats could be reduced.

The big question, of course is, what will the new Congress mean for policy? What’s going to change? The biggest change is the level of oversight given to policies coming from the Trump Administration. Secretary DeVos has largely been protected from on-the-record questioning by her Republican colleagues on Capitol Hill. That will change under Chairman Bobby Scott, who told the Secretary, rather bluntly, in a recent hearing, “your Department is moving us further away from the promise of educational equity contained within Brown v. Board.”

Congressional Democrats are chomping at the bit to scrutinize a nearly endless array of concerning polices coming from the Department of Education: suspending protections for student loan borrowers, rolling back Title IX protections against campus-based sexual assault, rolling back guidelines on special education, rescinding protections for transgender students, approving ESSA plans that violate the law’s requirements in support of historically underserved students…the list goes on.

In addition to increased oversight, we could also see movement on the Higher Education Act. It’s a heavy lift, but pretty likely that the House can pass a partisan bill because they have the votes to do so. Whether it has a real chance of reaching the President’s desk is another story altogether.

To find out what will be taking place under the new committee leadership and when, keep your eyes here on Federal Flash.

This blog post represents a slightly edited transcript of the November 9 episode of Federal Flash, the Alliance for Excellent Education’s five-minute (or less!) video series on important developments in education policy in Washington, DC. The video version is embedded below. For an alert when the next episode of Federal Flash is available, email at alliance@all4ed.org.