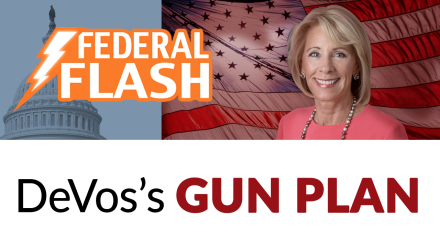 The Senate passed its education spending bill this week, but the biggest debate wasn’t over whether low-income students should receive more funding. It was whether Secretary of Education Betsy DeVos will allow school districts to buy guns with school safety money.

The New York Times reported that Secretary DeVos is considering allowing school districts to purchase guns and train teachers on how to use them using funds from the Student Support and Academic Enrichment Grant program, often referred to as Title IV.

Created under the Every Student Succeeds Act, Title IV provides districts with flexible funds that they can use to meet local needs. At least 20 percent of the funds from this program must be used to support safe and healthy school environments, 20 percent to support a well-rounded education, and some used to increase access to personalized learning supported by technology.

In response to the tragedy at Marjory Stoneman Douglas High School in Parkland, Florida, Congress gave this program $1.1 billion, a $700 million increase over the prior year. The funds were supposed to be used for things like school-based mental health services and professional development on crisis management. Now, instead of using the funds to keep students safe, it appears the Department may let the funds be used to train teachers to shoot guns.

Opponents of this move were quick to respond.

The Alliance for Excellent Education joined twenty other organizations ranging from the National PTA to Girl Scouts of the USA in denouncing the move, saying “The fact that the Department of Education is so desperate to promote guns in schools … is absolutely preposterous and…dangerous.”

Earlier in the week, Senator Ted Cruz of Texas filed an amendment to the education spending bill that would have allowed Title IV funds to harden schools against shooters through things like metal detectors and bullet-resistant doors.

Senator Chris Murphy, of Connecticut then filed an amendment to the Cruz amendment, formally called a second-degree amendment, to ensure that no funds from Title IV or any other education program would “be used for the provision to any person of a firearm or training in the use of a firearm.”

Congressional Democrats believe it would be a violation of the law to use these federal education dollars to buy guns. Congressional Republicans have been less clear about this, citing the law’s flexibility. For now, the issue is unresolved because the Senate passed the spending bill without addressing either the Cruz or Murphy amendments.

Although the Senate passed its bill, the full House has yet to act – so stay tuned.

In the meantime, we can tell you that the Senate’s bill rejected President Trump’s proposal to eliminate Title IV and instead proposed an increase to the program of $125 million. The senate bill would also provide funding increases to Title I, special education, and Pell Grants.

This blog post represents a slightly edited transcript of the August 24 episode of Federal Flash, the Alliance for Excellent Education’s five-minute (or less!) video series on important developments in education policy in Washington, DC. The video version is embedded below. For an alert when the next episode of Federal Flash is available, email at alliance@all4ed.org.