After more than a decade of progress in improving high school graduation rates, there remain about 1,300 traditional high schools in need of serious improvement and redesign, according to new research from the GradNation campaign. Among them are more than 800 low-graduation-rate high schools with an average graduation rate of 49 percent.  From the inner city to the heartland, these high schools sit at the fault lines of race, class, and inequity in America.

The Great American High School report, authored by Civic Enterprises and the Everyone Graduates Center at the Johns Hopkins University, was released today in partnership with America’s Promise Alliance and the Alliance for Excellent Education, the four leading organizations of the GradNation campaign working to increase the national on-time graduation rate to 90 percent.

“In spite of a decade’s worth of progress in reducing the number of low-performing high schools, we continue to live in two educational nations where a student’s chance at graduating high school varies wildly based on the school they attend,” said John Bridgeland, president & CEO, Civic Enterprises. “Most students attend schools where the average graduation rate has already reached the national goal of 90 percent and dropping out is rare. In the remaining schools, however, on-time graduation for students is only a 50-50 proposition.”

The research, which analyzes five national data sources from graduation rate data to Census data, identifies the progress made and remaining challenges in enabling all students to graduate from high school ready for college or career; documents the scale, scope, and location of the remaining low-performing high schools; shares the challenges these schools face; details what we know about effective and evidence-based high school reform; and lays out a path forward for supporting high school redesign in the communities and school districts that have not continuously improved.

Low-Performing High Schools Across the Nation. Great progress has been made in turning around low-performing high schools over the past decade, but to finish the job efforts must rise to serve students facing the greatest challenge.

In most cases, the challenges these high schools encounter are not confined within the walls of the school but are shaped and heightened by the challenges faced by the school district and community in which they are located. Overall, data show that the identified low-performing high schools are tasked with educating high concentrations of the most at need and struggling high school students in the nation. (Click on the map below for a larger version.) 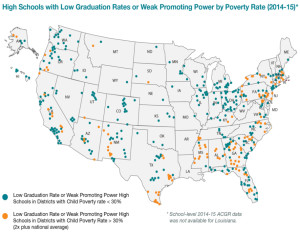 Five Archetypes and Similarities. To illuminate the intersection of school and community needs, the report describes five archetypes of the 1,300 low-graduation-rate high schools: a large urban fringe high school with a heavily Hispanic student body; an iconic big city neighborhood school; a rural high school educating an increasing number of poor, white students; the only high school in an economically distressed rust belt city; and an impoverished Southern school with an entirely Black student body.

While these archetypes emphasize the importance of local context in designing solutions, they also share similarities: intense concentrations of student need; limits on their organic capacity to respond to that need and bring additional resources into their schools, in part because the district, community, and school are all struggling to meet high levels of student need; attempted reform without sustained success, notwithstanding external pressure to improve; and proud histories.

“The nation’s remaining low-performing high schools have not been swept up in the first waves of reform. They often have proud histories and are located in communities with economic challenges,” said Bob Balfanz, director, Everyone Graduates Center at Johns Hopkins University School of Education. “As states begin to act on their ESSA plans, the time is now to organize support for the neighborhoods and communities most in need, and to redesign their high schools to become engines of community development, growth, and cohesion in the 21st century.”

“Improving the remaining low-performing high schools in the United States should be an urgent priority for communities, states and the nation,” said former Secretary of Education Arne Duncan.  “With 50 percent of off-track African-American and Latino students found in just 800 schools, we have an opportunity to focus like a laser on achieving educational equity.”

Policy and Practice Recommendations. As a result of ESSA, all states must identify these low-performing schools very soon, which presents an opportunity for stakeholders to better support them. The report presents a path forward through high school redesign that includes (but not limited to): tightly aligning redesign efforts with state ESSA plans for low-performing high schools; getting the needs assessment right; gathering authentic community input; building and pairing school networks with technical assistance providers to develop capacity and spread know-how; and using a common set of on-track indicators for tracking results.

“The nation has made good progress in reducing the number of low-performing high schools over the last decade. This report shows us just how close we are to the finish line,” added John Gomperts, president & CEO, America’s Promise Alliance. “Research and practice has helped us to identify what works. With the right resources, support and relationships in place, more schools, together with their communities, can make more progress to help more young people reach their full potential. Let’s get the job done.”

Authors. The Great American High School report is co-authored by Robert Balfanz at the Everyone Graduates Center at the Johns Hopkins University School of Education and Jennifer DePaoli, John Bridgeland and Matthew Atwell of Civic Enterprises.

Civic Enterprises is a public policy and strategy firm that helps corporations, nonprofits, foundations, universities, and governments develop and spearhead innovative public policies to strengthen our communities and country. Created to enlist the private, public, and nonprofit sectors to help address our nation’s toughest problems, Civic Enterprises fashions new initiatives and strategies that achieve measurable results in the fields of education, civic engagement, economic mobility, and many other domestic policy issues. www.civicllc.net.

The Everyone Graduates Center at the Center for Social Organization of Schools at the School of Education at Johns Hopkins University seeks to identify the barriers to high school graduation, develop strategic solutions to overcoming these barriers, and build local capacity to implement and sustain the solutions so that all students graduate prepared for adult success. www.every1graduates.org

America’s Promise Alliance leads the nation’s largest network dedicated to improving the lives of children and youth. As its signature effort, the GradNation campaign mobilizes Americans to increase the on-time high school graduation rate to 90 percent and prepare young people for postsecondary enrollment and the 21st century workforce. www.AmericasPromise.org

The Alliance for Excellent Education is a Washington, DC-based national policy and advocacy organization dedicated to ensuring that all students, particularly those who are traditionally underserved, graduate from high school ready for success in college, work, and citizenship. www.all4ed.org

Statement from Deborah Delisle on the House Appropriations Bill for Labor, Health and Human Services, and Education