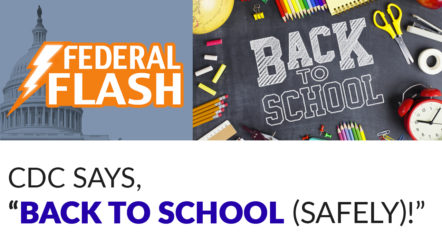 Last week, the Centers for Disease Control and Prevention (CDC) issued new guidance for reopening schools for in-person instruction during the pandemic. Notably, the guidance says states should give educators and other school employees priority access to COVID-19 vaccines, but that vaccinations should not be a precondition for reopening schools. Instead, the guidance doubles down on the importance of layered mitigation strategies, like masking and physical distancing stating, “K–12 schools should be the last settings to close after all other mitigation measures in the community have been employed, and the first to reopen when they can do so safely.” The U.S. Department of Education (ED) also released a handbook to provide tools for educators on implementing the new guidance.

While the CDC continues to emphasize universal masking and physical distancing of six feet whenever possible, the guidance features a new color-coded framework with suggested school-opening options, from in-person to hybrid to fully remote. These options are based primarily on the rate of viral spread in the community but also on adherence to mitigation strategies and whether screening tests for COVID-19 can be conducted. Based on the framework, in-person instruction should be offered when community spread is low or moderate. With regular COVID-19 testing and other safety strategies in place, schools could open for some in-person instruction even in areas where community spread is higher.

State leaders and school administrators have sought clearer federal guidelines for months in the face of a cacophony of opinions on whether—and how—it will be safe for students and educators to return to schools. Even though these decisions are made by local officials, the issue also has been a top priority for the administration, given President Biden’s goal for most schools to reopen during his first 100 days in office.

But the devil is in the details. The administration was quickly pressed to define what it meant by “most schools” and what counted as a “reopened” one. In unveiling the American Rescue Plan in January, the White House specified its focus to reopen a majority of K–8 schools during the first 100 days, with no set timeline for high schools. White House Press Secretary Jen Psaki also faced blowback over comments that “reopen” could mean offering in-person instruction as little as one day a week. She later clarified that the 100-day goal was a threshold, “we’re trying to leap over and exceed.”

The lack of national data on schooling during the pandemic has made it challenging to determine whether the president’s reopening goal is an ambitious one. Indeed, former Education Secretary Betsy DeVos claimed it was not the role of the agency to gather such data, but that will soon be changing. Earlier this month, ED announced it will collect monthly data on how many and how often students attend school in person, which students receive in-person instruction, and more. Given that the data will help track progress toward the president’s reopening goal, the nationally representative sample—for now—focuses only on schools serving grades four and eight. We’ll keep you posted.

Over on Capitol Hill last week, the House Committee on Education and Labor and the House Committee on Energy and Commerce advanced legislation that would provide billions of dollars to support education during the pandemic. The House Education Committee’s legislation would provide $130 billion to help K–12 schools reopen safely. Unlike prior COVID-19 relief, at least 20 percent of funding would be targeted to address learning loss resulting from the pandemic through evidence-based interventions; extending learning time; and other activities that meet the academic, social, and emotional needs of students. Another new addition is that in order to receive the funding, states would have to comply with new maintenance of equity requirements that would prevent reductions in education funding at the state level from falling disproportionately on high-poverty school districts. All4Ed’s President and CEO Deborah Delisle praised the bill for providing “critical resources for the nation’s students and schools to help address this time of uncertainty and instability for many families.”

The House Energy and Commerce Committee also passed legislation supporting education. Specifically, the committee’s bill would provide $7.6 billion to address the homework gap through the E-rate program. This is critical as the Alliance for Excellent Education (All4Ed), the National Indian Education Association, National Urban League, and UnidosUs find that one in three Black, Latino, and American Indian/Alaska Native households lack high-speed home internet.

Unfortunately, direct support for students experiencing homelessness is noticeably absent from the aid package being developed on Capitol Hill. Funds from the Coronavirus Aid, Relief, and Economic Security  (CARES) Act may be used to support these students, but in a survey of more than 1,400 school district homeless liaisons, only 18 percent indicated these dollars were actually being spent on homeless children. As a result, one in four homeless children are missing from school. Emergency aid legislation usually targets funding to the McKinney Vento Education for Homeless Children and Youth program. Unfortunately, neither President Biden’s American Rescue Plan nor the legislation making its way through Congress directs funding to these young people, at least not yet.

The full House still needs to vote on the relief bill, and the Senate will soon take up this legislation as well. Here at All4Ed, we urge Congress to pass COVID-19 relief and include targeted funding for the Education for Homeless Children and Youth program. More information is available here.

This blog post represents a slightly edited transcript of the February 16 episode of Federal Flash, All4Ed’s video series on important developments in education policy in Washington, DC. The podcast and video versions are embedded below. For an alert when the next episode of Federal Flash is available, email alliance@all4ed.org.

Phillip Lovell is vice president for policy development and government relations at All4Ed.