The FRS Student Voice is a blog series to that provides a forum for students to share how they have been impacted by their leaders who are supporting the FRS Program.

My name is Adam and I’m a sixth grader going to Still Middle School, and I think the educational system should be changed for the better. I got the idea of wanting to change the way we learn from a project my teacher assigned us called the ‘passion project’.  This project aimed to allow students to research and encourage kids to step up for something we are passionate about what we feel needs changed. This is also part of our ELA quarter three theme of Stepping Up. I have been interested in the school system ever since last summer. Considering I travel a lot, and my cousins have been all around the world, I have became exposed to different education systems and content students learn around the world. That’s when I started researching and looking more into our current school system here in America.

“Everybody’s a genius. But if you judge a fish by its ability to climb a tree, it will live its whole life believing that it is stupid.”-Albert Einstein. I bet that every student can relate to that fish, believing they are stupid, but they’re not. A student should be educated by their wants, needs, and dreams, and shouldn’t be represented by a grade because a grade is just a letter and that discludes so much about a student. Student advancements are measured by Standardized tests, such as PARCC, which only measures a portion on what makes education meaningful. According to late education researcher Gerald W. Bracey, PhD, qualities that standardized tests cannot measure include creativity, critical thinking, resilience, motivation, persistence, curiosity, endurance, reliability, enthusiasm, empathy, self-awareness, self-discipline, leadership, civic-mindedness, courage, compassion, resourcefulness, sense of beauty, sense of wonder, honesty, and integrity. The man who invented standardized testing, Frederick J. Kelly, said “These tests are too crude to be used, and should be abandoned.”

Schools Around the World

Again, because I have family that studies in different schools in different countries around the world such as Egypt, Dubai, Australia, and Canada, I became more interested and wanted to further my research into different countries, leading me to Finland. They focus on cooperation instead of competition, there are no private schools, and teachers are trained to issue their own tests instead of standardized tests. Teachers are paid a decent wage and are valued much more than they are in the US. Finland is also very experimental if the data shows that a certain strategy is working they give it a shot. “Overall, education in the United States is much more political than it is in Finland, where it’s much more of a professional issue,” Sahlberg told Business Insider. Despite the US being one of the top leading countries in the world, they choose to go a more conventional approach on education.

The Factory Model of Education

I think the best way to describe the current educational set up for the US is the term known as ‘the factory model’. In the 1920th century the industrialized economy greatly impacted our school system.  Although we currently have a much more flexible nation, we continue to choose the factory model of education as our approach to our educational system. That explains why the bell rings, and you move to where the schedule puts you, the bell rings again, you do as you’re told. Everyone gets processed in the same way, and at the end of the line you emerge with a certificate of quality. I noticed as I converted into middle school, and got encore (elective) classes, I found myself putting  creative input in my work in school but in elementary school, where there weren’t encore classes, I felt I was being told what to think for six hours a day.

In conclusion, I think the school system should be changed for the better. We can do this with three steps. Allow kids to be more creative with their schoolwork, focus on cooperation instead of competition, and get rid of standardized tests.  It is important that value and respect teachers the way they should be. Lastly, we should get rid of the mid 19th century’s model of school and bring in the 21st century’s model. 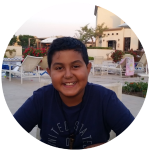 Adam is sixth grader at Still Middle School, Aurora, Illinois.  He plays on a basketball travel team. He has an Egypt heritage, and visits his relatives from there yearly. He likes to draw, and include creativity into his life in general.