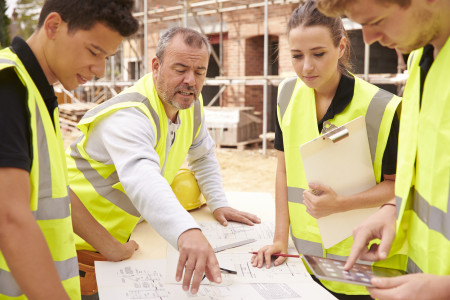 Students in the United States are graduating from high school and completing college at the highest rates in decades. On the surface, these growing education levels seem to offer reason to celebrate. But a closer look reveals a widening income and employment gap between high school graduates and their peers who pursue and complete postsecondary education.

The national high school graduation rate is at an all-time high of 83.2 percent for the Class of 2015. But, if those graduates decide not to continue their education beyond high school, they can expect to earn about half of what their college-educated peers will earn annually. In 2016, adults ages 25 years and older with just a high school diploma earned an average of $35,615 per year, according to new data from the U.S. Census Bureau. By contrast, individuals with a bachelor’s degree averaged $65,482 that year and those with an advanced degree averaged $92,525 per year. (Among individuals 25 years old and older, more than one-third now have a bachelor’s degree or higher. That’s the highest percentage since the U.S. Census Bureau began tracking educational attainment data in 1940.) 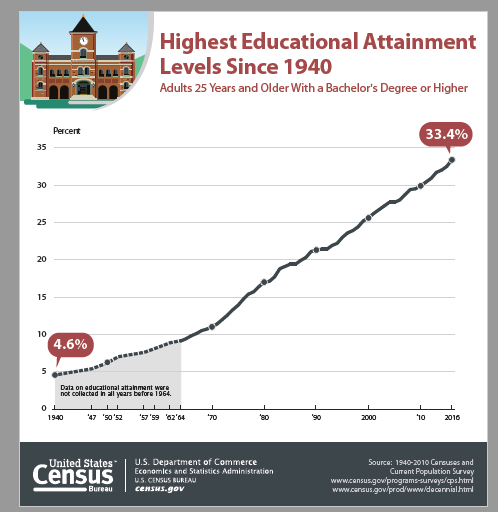 This growing income gap reflects fundamental structural changes in the U.S economy. Since the second half of the twentieth century, job creation in the United States has shifted toward industries—such as healthcare, consulting, and business—that employ a high share of workers with postsecondary education. At the same time, the economy has moved away from production industries that historically employed workers with lower levels of educational attainment (construction and manufacturing), according to a report from Georgetown University’s Center on Education and the Workforce (CEW). Essentially, the nation has shifted from an economy driven primarily by high school–educated labor to one in which almost two in three jobs require some form of postsecondary education or training, says the CEW. Consequently, fewer new jobs are being created for workers with only a high school diploma. Of the 11.6 million jobs created since the Great Recession, 99 percent have gone to workers with at least some postsecondary education, according to the CEW.

Furthermore, many employers want workers with more education. In a survey conducted by CareerBuilder, 37 percent of employers said they now hire employees with college degrees for jobs they once filled with applicants who had only a high school diploma, The 74 reports. Among these “noncollege jobs,” college graduates also are more likely than high school graduates to receive higher-paying positions and positions in management and supervisory roles, according to a report from the Federal Reserve Bank of New York.

The problem, many employers say, is that high school graduates simply aren’t prepared sufficiently to enter the workforce directly after high school. “I wouldn’t assume that more high school diplomas awarded equals a more career-ready workforce,” says Jason Tyszko, executive director of the U.S. Chamber of Commerce’s Center for Education and the Workforce, in The 74. “The opaqueness of those credentials—a high school diploma or even, frankly, a bachelor’s degree—is causing a lot of consternation in the business community. There just isn’t a lot of confidence in what somebody knows or is able to do, or if they’re able to perform the job.”

Moreover, while employers increasingly look for workers with some form of postsecondary education or training, institutions of higher education are not meeting that demand. By 2020, the U.S. economy will fall 5 million short of the number of workers with postsecondary degrees needed, according to another report from CEW.

One obvious solution is for the nation to address the persistent gaps in college attainment rates among young people of color and those from low-income families. While the percentage of young adults of color earning at least an associate’s degree has increased during the past twenty years, the attainment gap between whites and African Americans still is 15 percentage points, while the gap between whites and Latinos is 30 percentage points. Similarly, among 25- to 34-year-olds, 72 percent of those from affluent backgrounds have earned a postsecondary degree or certificate, while just 35 percent of those from low-income families have done so, according to a report released last year as part of the GradNation campaign.

A high school diploma alone no longer guarantees a stable career and middle-class income. In fact, individuals who choose not to pursue postsecondary education or training now find themselves locked out of positions that high school graduates once dominated. As demand for college-educated workers continues to rise, the nation must increase opportunities for students to pursue postsecondary education and training to ensure all young people have a chance at career and life success.