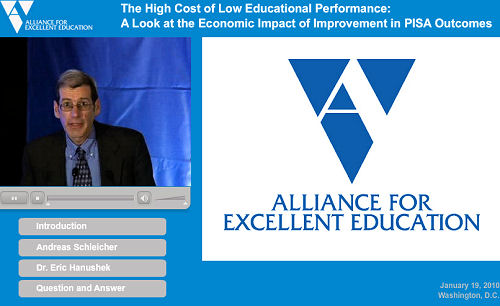 Relatively small improvements in students’ educational performance can have large impacts on a nation’s future economic well-being, according to The High Cost of Low Educational Performance: The Long-Run Economic Impact of Improving PISA Outcomes. PISA, the Program for International Student Assessment, was created by the Organisation for Economic Co-Operation and Development (OECD) in1997 to monitor the outcomes of education systems in terms of student achievement on a regular basis and within an internationally greed-common framework. This PISA report, to be presented on January 28 at the World Economic Forum in Davos, Switzerland, uses economic modeling to relate cognitive skills (as measured by PISA) to economic growth. The report shows that achievable gains in educational performance yield tens of trillions of dollars in gains in a nation’s gross domestic product.

On January 19, the Alliance for Excellent Education hosted an online forum to preview a new report by the Paris-based Organisation for Economic Co-Operation and Development (OECD), The High Cost of Low Educational Performance: The Long-Run Economic Impact of Improving PISA Outcomes. The report outlines findings from an international study that used economic modeling to show that even modest and achievable gains in student learning yield large increases in a nation’s gross domestic product over the long run. The report was officially released on January 25 at the World Economic Forum in Davos, Switzerland.

Robert Rothman, senior fellow at the Alliance for Excellent Education, opened the forum by describing the study as one that builds on other work, including that from the Alliance for Excellent Education, that links educational improvements not only to benefits to individual students but also to their larger communities. In the case of this study, which takes an international perspective on the topic, improvements in education are linked to improved economic outcomes for entire nations.

Andreas Schleicher, head of the Indicators and Analysis Division at the OECD’s Directorate for Education, set the stage by reminding viewers that this report comes out as the world is starting to exit a severe economic downturn where new workers entering the job market face stiff competition from those already in the market. As we have moved further into the twenty-first-century economy, he explained, an individual’s knowledge and skills are emerging as the predictor of his or her success in the work force, more so than education level, which had previously been thought to be the key determinant. Mr. Schleicher went on to identify the Programme for International Student Assessment (PISA)—an assessment of fifteen-year-old students administered by the OECD across the globe—as an instrument that can measure and compare the knowledge and skills of students in participating countries, thereby gauging the quality of their education systems. PISA scores over time, he explained, can be used to compare improvements in the quality of a nation’s education system to improvements in its economic health.

Eric Hanushek, the Paul and Jean Hanna senior fellow at the Hoover Institution of Stanford University and coauthor of The High Cost of Low Educational Performance, then discussed his findings for the United States based on the comparison that Mr. Schleicher described. He described three scenarios and the resulting impact on the nation’s economy for each.

During the question and answer period, Mr. Schleicher and Dr. Hanushek shared the following insights:

PDF
“High Cost of Low Educational Performance” A PowerPoint presentation by Eric Hanushek, a coauthor of the report