The Daily Dish – The Impact of a Great Teacher 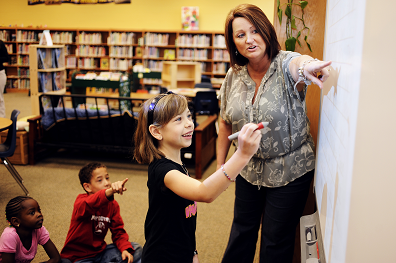 This week, Shanna Peeples was honored as American’s Teacher of the Year. The high school English teacher from Amarillo, Texas has taught refugee students from war-torn countries who faced challenges that would discourage any student. But through Peeples continued efforts, these students thrive. The impact of a great teacher such as Peeples can follow a student for years – from elementary to college – even all the way to the White House.

On Wednesday, after honoring Peeples, President Barack Obama reflected on the influence his fifth grade teacher had on his life. In an email to the White House mailing list, Obama spoke of how his teacher, Mabel Hefty, made every student in her class feel special and reinforced the value of empathy that he carries with him today. Calling the power of a good teacher “undeniable,” Obama said every student regardless of background or socioeconomic status so have access to the kind of quality teacher he remembers so fondly.

A great teacher is many things, including an empowered teacher. Believing in a teacher’s ability to lead his or her students is key to a successful implementation of the Common Core State Standards, according to a new student from the Center for American Progress (CAP). The report, Teacher Leadership: The Pathway to Common Core Success, examines districts throughout the country that have taken collaborative approaches to ensure teachers have a significant voice in employing the standards. Through interviews and observations of these approaches, the report’s authors concluded that a teacher’s leadership is vitally important from day one of implementation.

As Carmel Martin, executive vice president for policy at the Center for American Progress, put it in US News & World Report Wednesday: “The time invested paid off in the form of a sustainable and effective implementation process.”

Martin added that encouraging teachers during the process of implementing new standards can go a long way when it comes to their attitudes about the profession. And according to new data from the National Center for Education Statistics, the attitude of new teachers is shifting, with far less teachers leaving the profession than previously thought. The federal data released Tuesday indicates that just 17 percent of new teacher left their jobs within the first five years – a much lower attrition rate than what was previously believed to be nearly 50 percent.  As The Washington Post’s Emma Brown wrote,

“The new findings present such a different picture that they have the potential to change the national conversation about new-teacher attrition, a problem that cascades across issues…”

For those teachers who continue in the profession – impacting struggling students, and future presidents – the nation is gearing up to say, “Thank you.” May 4-8 marks Teacher Appreciation Week, when everyone is asked to take the time to thank the educator that has impacted his or her life as a student, parent, or community member. People are encouraged to use the hashtag, #ThankATeacher, to share their stories.