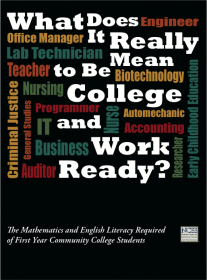 In his classic book, Horace’s Compromise, the late educator Ted Sizer wrote that high school teachers and students enact “treaties” with one another: the students agree not to cause trouble, and the teachers agree not to push the students too hard. The result, all too often, is that students don’t learn very much.

A new study by the National Center on Education and the Economy (NCEE) shows that community colleges and their students appear to engage in similar negotiations, with similar results for students. The cost is much higher than it was three decades ago, when Sizer wrote his book, though, because the need for higher levels of knowledge and skill is much greater now.

The NCEE study looked closely at entry-level mathematics and English courses in seven community colleges. The researchers examined the textbooks used, the assignments given to students, and the tests teachers administered. What they found was disturbing.

In mathematics, the researchers found very little—very little college-level math, that is. Most of the math taught was middle-school topics, like proportionality, and the cognitive demand was very low. Even when textbooks challenged students to do mathematical reasoning and apply their knowledge to solve complex problems, the tests students took did not ask them to do so. They mainly measured students’ abilities to follow procedures.

In English, the story was similar. Textbooks were appropriately challenging—at the eleventh or twelfth grade level—but many teachers simply summarized the information in the texts (using PowerPoint or videos), and tests asked students simply to recall facts, not to analyze the information from the texts. There was very little writing required.

These findings suggest strongly that students come to community colleges with serious knowledge and skills gaps, and the colleges accommodate them by not asking much of them. The result is that the students who complete the programs end up without the deeper learning abilities they will need to succeed in the workplace—to use knowledge to solve problems, to construct arguments based on evidence, to communicate effectively. And while not all occupations demand such abilities, many do, including some that might have been considered purely manual jobs in the past. As one participant noted at a forum NCEE held to release the report, welders now need to think critically (and they get paid well, too).

States, districts, and schools are now struggling to implement the Common Core Standards, and in some states, there are efforts to pull out of the initiative. The NCEE report shows that this would only reinstate the treaties that now govern instruction in community colleges. As Ted Sizer recognized, those treaties might have smoothed feathers in classrooms, but they had devastating consequences for young people.