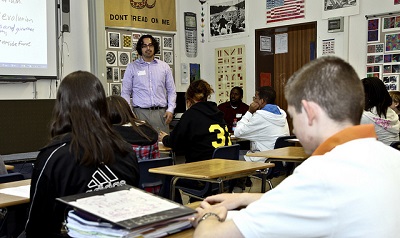 Children of military families often move between regular public schools and those in the U.S. Department of Defense Education Activity (DoDEA) Now, in part to ensure a smoother transition between the two systems, DoDEA plans to spend the next three to five years phasing in the Common Core State Standards. The Hechinger Report

Anti-Common Core campaign rhetoric hasn’t translated into many victories for those seeking to repeal the standards. Legislators in 19 states introduced bills to repeal the Common Core this session. So far none have succeeded. The Hechinger Report

A growing number of parents are refusing to let their children take standardized tests this year, arguing that civil disobedience is the best way to change what they say is a destructive overemphasis on tests in the nation’s public schools. The Washington Post

A new report from UCLA finds that K-12 schools in Wisconsin suspend black high school students at a higher rate than anywhere else in the country and has the second-highest disparity in suspension rates between white and black students. NPR

Our schools are immersed with digital tools and resources that are used to educate our children. However, there are so many new technologies that are developed that sometimes it’s hard to keep up. Fear not; there is a solution. Digital Learning Day on March 13 is a day when educators showcase innovative teaching practices through technology. Fay Observer

Louisiana Education Superintendent John White’s Common Core compromise easily passed a Board of Elementary and Secondary Education committee Thursday, however, board members have not decided what happens to schools and teachers when students opt out of the new Common Core tests that start in two weeks. The Times Picayune

A bill introduced last week asks California legislators to make implementing the Common Core and other new standards the top priority in spending a chunk of the extra $2 billion that the Legislative Analyst’s Office says could come K-12 schools’ way next year. EdSource

On Wednesday, Rep. John Forgety announced he was foregoing a bill to replace the Common Core State Standards in Tennessee, in part because of a predicted $4 million price tag for the state. In reality, a repeal of the standards could cost much more. Chalkbeat TN

As the debate over No Child Left Behind rages in Washington, Texas policymakers are distancing themselves from the federal law that was conceived in the Lone Star State. The Houston Chronicle

Tens of thousands of students in Maryland and The District of Columbia sat down this week to take a new kind of standardized exam. The Washington Post

Months after the high-profile launch of a $150 million turnaround program for struggling schools, New York City has heaped extra supports on some of the schools while others are still waiting for the intensive help they expected. Chalkbeat NY

Colorado’s Senate Education Committee voted unanimously Thursday to approve a key student data privacy bill, but not until adding an amendment that might complicate the delicate balance of interests backing the measure. Chalkbeat CO