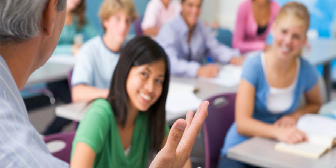 One way to help low-performing students do better in school could be to put them in classrooms with teachers who share their race, according to a new study set to be released in the April issue of the Economics of Education Review. The study looks at how students’ test scores are impacted by the race of their teachers. The Huffington Post

The majority of more than a 1,000 teachers surveyed by Teach Plus thought that the Partnership for Assessment of Readiness for College and Careers (PARCC) test would be better than what they currently have in their states, they also had suggestions on ways to improve the tests. The Hechinger Report

While you’re reading that, be sure to check out a recent blog from Robert Rothman, a senior fellow at the Alliance. Rothman discusses why the PARCC assessment is different and more valuable than those of the past – which is why his daughter won’t be opting out of the exam.

The White House is weighing steps to make it easier for Americans to expunge certain student loans through bankruptcy, opening the door for student debt made by private lenders to be treated on par with credit-card debt and mortgages. The Wall Street Journal

The two-page report California parents will receive later this year describing their children’s results on the new Smarter Balanced tests on the Common Core State Standards will be very different from what they’ve seen in the past. EdSource

The board for Metro Nashville Public Schools voted unanimously Tuesday to delay exploration of a lawsuit against the state over inadequate school funding. Chalkbeat TN

The stakes are high for New York City’s school-turnaround program, in which Mayor Bill de Blasio promises to flood nearly 100 struggling schools with support for students and staff. Chalkbeat NY

Indiana superintendents have a message for state budget-makers: All schools need more funding, but it can’t come at the expense of the state’s poorest districts. Chalkbeat IN

Reading and literacy are high priorities for D.C. public schools, but the District dedicates no annual funding for school-library collections, instead relying on the help of parents or the kindness of strangers to stock its shelves through donations. The Washington Post

Decisions about college majors, careers and fields of study are daunting for most young people, but for students who have lost their way in traditional schools, the choices can be even more difficult. EdSource

The New York City City Council’s education committee passed a bill Tuesday that would require the Department of Education to release annual reports detailing what percentage of students are getting the special-education services they require. Chalkbeat NY