Federal Flash: Will Trump Support a Congressional Plan to Provide Hope for Dreamers and Save DACA? 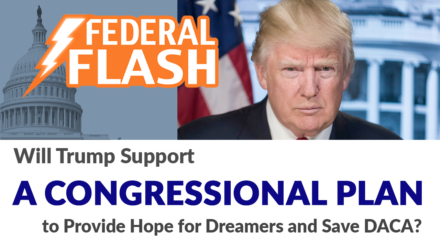 Will a recently passed bill in the House of Representatives provide hope for Dreamers and save the Deferred Action for Childhood Arrivals (DACA) program?

This Federal Flash has some answers and also details a new bill to support middle schools and a new report questioning how—and if—states are identifying schools for support and improvement under the Every Student Succeeds Act (ESSA).

On Tuesday, the House of Representatives passed the American Dream and Promise Act by a vote of 237 to 187. Seven Republicans joined all Democrats present for the vote in supporting the measure. The legislation would provide a path to citizenship for undocumented young people who have been in the United States for at least 4 years and meet certain requirements, such as being enrolled in high school or admitted to college. After living in the US for 10 years, DREAMERS would gain permanent resident status if they have worked for at least 3 years, have completed at least two years of higher education, or completed at least two years in the military.

The bill is good news for those jeopardized by President Trump’s decision to cancel DACA, the Deferred Action for Childhood Arrivals program. But good news is not legal certainty. The Senate would need to pass and the president would need to sign the American Dream and Promise Act in order for it to become law. This seems unlikely. The White House threatened to veto the bill, saying the legislation “…would only exacerbate illegal immigration and the exploitation of our immigration laws….”

While the legislation tries to make its way through Congress, DACA is on life support in the courts and may be taken up by the Supreme Court in the coming weeks.

Upon introducing the legislation, Representative Grijalva said, “Despite success in the middle school years being one of the most pivotal indicators of future success and achievement, middle grade education remains grossly underfunded in school districts across the country.”

Here at the Alliance for Excellent Education, we’ve documented the chronic underfunding of the middle grades at the federal level. As you can see in this chart (shown below), there is a striking difference in the level of funding provided to middle and high school compared to early childhood and higher education. The Success in the Middle Act aims to address this gap in support and funding for middle schools.

All4Ed President Deb Delisle praised the legislation, saying that the middle grades are “an absolutely critical time for ensuring that every child develops the knowledge and skills needed for future success in high school and beyond.”

New Report on How States Are Identifying Schools for Support

Off Capitol Hill, the Center on Education Policy released new data on the implementation of the Every Student Succeeds Act or ESSA. Under the new federal law, states are required to identify three categories of low-performing schools for support. The lowest performing 5 percent of Title I schools and high schools with graduation rates below 67 percent are identified for comprehensive support and improvement. In addition, schools are identified for targeted support and improvement or additional targeted based upon the performance of historically underserved students.

This blog post represents a slightly edited transcript of the June 7 episode of Federal Flash, the Alliance for Excellent Education’s video series on important developments in education policy in Washington, DC. The video version is embedded below. For an alert when the next episode of Federal Flash is available, email at alliance@all4ed.org.