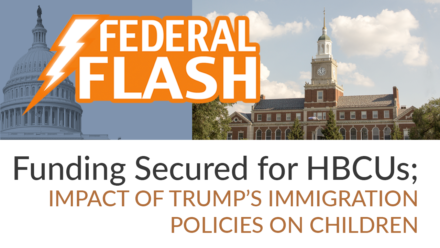 On Tuesday, the House and Senate passed legislation to permanently reauthorize more than $250 million to support historically black colleges and universities, or HBCUs, and other minority-serving institutions. Funding for these institutions was in limbo as members negotiated a broader Higher Education Act reauthorization. An overall HEA deal continues to elude Congress, but at least funding for HBCUs is secure. The legislation also achieved a longstanding priority of Senate Education Committee chairman, Lamar Alexander: simplifying the Free Application for Federal Student Aid, or FAFSA.

The FAFSA Act makes it easier for the Education Department and Internal Revenue Service to share students’ tax information, making it easier for students to apply for federal financial aid and income-based loan repayment programs. Because the FAFSA Act is expected to increase the accuracy Pell Grant and financial aid awards, the Congressional Budget Office estimates it will save nearly $3 billion over the next decade. These savings will be used to pay for the permanent extension of HBCU funding.

How the Trump Administration’s Immigration Policies are Harming Children

Last week, the House education committee held a hearing on how the Trump Administration’s immigration policies are harming children. Committee Chairman Bobby Scott noted that about 27 percent of all children living in the United States — nearly 20 million children — are growing up in immigrant families. Federal law ensures that these children have the right to a free public education, including early childhood education and programs that deliver basic nutrition assistance.

In his opening statement, Scott asserted that the Trump Administration has “implemented draconian immigration policies and inflammatory rhetoric to discourage or prevent children growing up in immigrant families from accessing basic services for which they are eligible under federal law.” Mr. Scott also noted that while immigration policy is not within the jurisdiction of the Education Committee, it is their responsibility to “protect the rights of immigrant children – regardless of their status – so that they learn, grow, and contribute to our nation.”

Also last week, the Organization for Economic Cooperation and Development (OECD) released the results of the 2018 Programme for International Student Assessment, or PISA. The results showed American 15-year-old students performing 8th in reading, 11th in science, and 30th in math, compared to their international peers. That performance placed U.S. teenagers above the international average in reading and science but below it in math. While overall rankings for U.S. students improved since the previous assessment three years ago, that gain was attributed to decreased performance in several other countries.

Finally, 11 education organizations including teachers unions, civil rights organizations, and community groups, will host eight of the Democratic presidential candidates in Pittsburgh this weekend for an education forum focused on “Equity and Justice for All.” The forum will address topics such as school funding, student services, special education, student debt, and teaching conditions. Michael Bennet, Joe Biden, Cory Booker, Pete Buttigieg, Amy Klobuchar, Bernie Sanders, Tom Steyer, and Elizabeth Warren are slated to participate. The forum will be streamed live on Saturday, December 14th at 10am on NBC News Now, MSNBC.com, and NBC News Learn. It will also be featured across MSNBC programming.

This blog post represents a slightly edited transcript of the December 13 episode of Federal Flash, the Alliance for Excellent Education’s video series on important developments in education policy in Washington, DC. The video version is embedded below. For an alert when the next episode of Federal Flash is available, email at alliance@all4ed.org.