Congress on the edge:
Narrowly avoiding a government shutdown but a fiscal cliff approaches 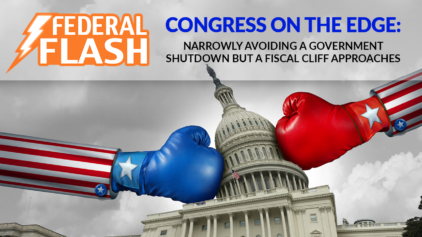 Washington, D.C. is abuzz with activity as Congress narrowly avoided a government shutdown. Both the administration and Congress have made addressing student loan rules and forgiveness, especially for teachers, a top priority. Meanwhile, schools across the country work to keep students and educators safe as vaccine requirements and our understanding of COVID-19 continues to shift—and the Biden administration steps up to protect teachers and school board members facing violence over their decisions to help stop the spread of COVID-19.

Last week, a few hours before the end of the fiscal year on September 30th, Congress passed a nine-week, stopgap measure to keep the government funded through December 3rd. The continuing resolution will keep all spending levels, including education, static—with a few exceptions like aid for Afghan refugee resettlement and for communities recovering from major disasters. This buys Congress a little more time to work out a broader budget deal that includes much-needed new funding or pass another temporary fix.

As mentioned in a previous Federal Flash, Congress is working on the Build Back Better reconciliation bill that could make several key investments in education, including universal pre-kindergarten and two years of free community college. However, House Democrats have linked a vote on the partisan reconciliation bill to a vote on the bipartisan infrastructure bill, which has already passed the Senate. House Speaker Nancy Pelosi said “more time is needed” to reach an agreement between moderate and progressive Democrats on this social spending bill before the House will vote on the infrastructure bill.

The House Budget committee has reported out the Build Back Better Act proposals of 13 House subcommittees, many of which include education investments. But Senate committees likely will not mark up the bill. Instead, leaders are negotiating what could pass with all 50 Democratic Senators’ votes, particularly Senators Kyrsten Sinema (D-AZ) and Joe Manchin (D-WV), and comply with the technical rules of reconciliation, the Senate’s so-called “Byrd Rule.” Senator Manchin originally said that he would support a maximum of $1.5 trillion in spending, but now indicates he is open to the $1.9 to $2.2 trillion range that the president has suggested. Still, it is a far cry from the $3.5 trillion that other Democrats support. Time will tell what the final numbers look like, but education advocates are working hard to protect key provisions, including the child tax credit, child care, and free community college.

Congress avoided one crisis last week, but another looms ahead. Congress must vote to suspend or raise the debt ceiling by October 18th to avoid triggering a disastrous default on the nation’s debt that could damage the economy for years.

Senate Majority Leader Chuck Schumer has told his colleagues that debt limit legislation needs to be on the president’s desk by the end of the week. Senate Minority Leader McConnell sent a letter to the president telling him that he needs to find a one-party solution.

With both the infrastructure and reconciliation packages in limbo, plus the debt ceiling, October is sure to be filled with many pivotal decisions. Even though the House is not in session, members could be called back for a vote, and the Senate may work into the weekend, to iron out a final deal. We’ll keep you posted.

The Biden administration finalized membership of a rulemaking committee to negotiate changes to federal higher education policies. The sixteen-member group includes state regulators, representatives from colleges, the student loan industry, consumer advocacy organizations, and more. However, the panel rejected motions to add members, including a former for-profit college student who is a plaintiff in a class-action lawsuit against the Education Department.

The panel will attempt to reach consensus on new rules to protect students, especially student borrowers. Some of their key tasks will be to make it easier for students defrauded by their colleges to obtain loan forgiveness and to overhaul the rules for various student loan debt relief programs, like those for students with disabilities and public service workers. This comes as new data shows 98 percent of all borrows who have applied for the Public Service Loan Forgiveness program, including more than 4,500 teachers, have been rejected.

Relatedly, a bipartisan bill to fix the Teacher Education Assistance for College and Higher Education Grant – or TEACH grant – program awaits President Biden’s signature. The TEACH grant program gives up to $4,000 per year to college students training to be teachers. In return, they must teach for four years in a high-need field at an underserved school. However, a federal report revealed that more than two-thirds of teachers had their grants converted to loans, often due to clerical errors. The Consider Teachers Act would make wrongfully converted loans grants once again, and extend the time teachers have to finish their service requirements by three years for those affected by the pandemic.

Across the country, states and districts continue to adjust rules around COVID vaccination, especially now that Pfizer has submitted data to the Food and Drug Administration (FDA) indicating their vaccine is safe for five to eleven year-olds. The FDA’s Acting Commissioner Janet Woodcock urged parents to trust the agency to follow the science on vaccines, and the FDA is expected to authorize the Pfizer vaccine for emergency use for children in that age group soon.

Many states and districts are now requiring eligible students to be vaccinated to participate in after-school programs and athletics. New York City, Washington, D.C., and Chicago announced plans to ensure that all those participating in sports must be vaccinated—a move already made by Hawaii, which pushed back the start of the fall athletics season so players could be inoculated by the end of September. California Governor Gavin Newsom went further, announcing that the COVID-19 vaccine will be added to the list of required immunizations to attend school once federal officials fully approve the vaccines.

As education leaders have adopted tougher mask and vaccine requirements, threats and acts of violence toward educators who attempt to implement them have increased. Both the National School Boards Association and the National Association of Secondary School Principals urged President Biden to use the Justice Department and other federal agencies to support and protect school officials, citing more than 20 instances of threats, harassment, disruption, and acts of intimidation. Attorney General Merrick Garland announced he will present measures in the coming days to “address the rise in criminal conduct directed toward school personnel.” Members of Congress, like Representative Carolyn Bourdeaux (D-GA), have also asked Secretary Cardona whether their COVID-19 Action Plan applies to colleges accepting federal grant money, which could tie COVID-19 vaccination, masking, and testing requirements to federal higher education aid.

This request would create a potential new battleground between the Biden administration and Republican state leaders over how closely schools and higher education institutions should follow Centers for Disease Control (CDC) guidance. So far, sixteen states have passed bans prohibiting COVID-19 vaccine requirements for elementary through college students. In Ohio, for example, lawmakers approved a measure that bars public schools and colleges from requiring a vaccine not fully approved by the FDA or from limiting activities for those who refuse the vaccine. Tennessee Governor Bill Lee approved a law prohibiting the state health commissioner from designating COVID-19 as a disease children must be immunized against before they attend any school or child care facility.

This blog post represents a slightly edited transcript of the September 15, 2021 episode of Federal Flash, All4Ed’s video series on important developments in education policy in Washington, DC. The podcast and video versions are embedded above. For an alert when the next episode of Federal Flash is available, email alliance@all4ed.org.