WARNING SIGNS: Issue Brief Describes Key Indicators That a Student is At Risk of Dropping Out

Rating
“Districts interested in developing early warning systems should explore the factors (e.g., academic performance, engagement, or social and individual characteristics) that are most strongly associated with whether past students graduated successfully or dropped out.” 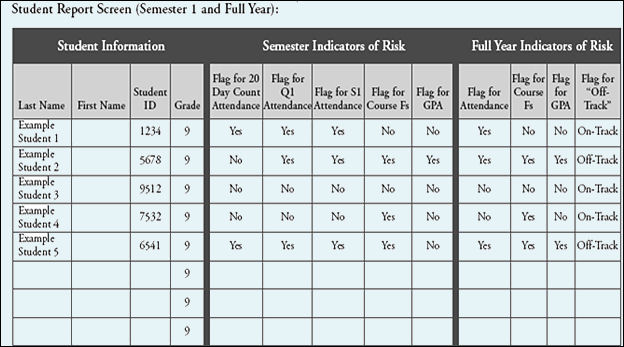 More students fail the ninth grade than any other grade in high school, and students who are held back in their freshman year are especially likely to drop out, says the National High School Center (NHSC) in its issue brief “Developing Early Warning Systems to Identify Potential High School Dropouts.” The brief reviews findings culled from research performed in Chicago; Fall River, MA; and Philadelphia, and outlines for local educators and policymakers the importance of establishing early-warning systems, even helping to guide them in the creation of their own.

Early-warning systems look at several indicators researchers have found to correlate with a student’s probability of dropping out. With such a system in place, the idea is that educators can intervene to help struggling students toward the beginning of their high school careers and work to get them on track to graduate sooner rather than later.

The brief finds that course performance and attendance are the strongest predictors of whether a student will complete high school. It cites the Consortium of Chicago School Research (CCSR)’s “on-track indicator” as a powerful gauge of a student’s likelihood of graduating. CCSR looked at both credits earned and course grades, classifying first-year Chicago Public School freshmen as on track if they earned at least five full-year course credits and no more than one F in one semester in a core course. CCSR determined that on-track students were three-and-a-half times more likely to graduate in four years than their off-track classmates. In addition, students with first-semester absences adding up to a week or more (Chicago) and those who were absent frequently in the first thirty days of the school year (Philadelphia) were more apt to drop out and/or fail the ninth grade.

When describing how to establish an early-warning system at the school level, NHSC emphasizes that the data required is routinely available at the school level (e.g., grades, credits earned, and number of absences). It suggests a number of research-based “benchmarks” for schools to follow. For example, a student who  misses more than 10 percent of instructional time in a quarter or semester, has one F or more (regardless of whether it is a core course), or has a grade point average (GPA) below 2.0 at the end of his or her first year could be flagged in the database for targeted interventions.

A copy of NHSC’s sample database appears below. Example Student 2, for instance, had poor attendance in the first quarter (Q1) and semester (S1), at least one F, and a GPA below 2.0. These factors persisted over the course of the year, as the third section of the database indicates, so the student was flagged as off track.

Though the indicators described above were the most powerful predictors of graduation across the three districts studied, the brief calls for other districts to analyze patterns and indicators within their own boundaries before implementing their respective systems.

“Districts interested in developing early warning systems should explore the factors (e.g., academic performance, engagement, or social and individual characteristics) that are most strongly associated with whether past students graduated successfully or dropped out,” it reads. “With this information in hand, school systems can move forward and implement data systems that accurately predict which current and future students are at the highest risk. This can improve the efficiency and effectiveness of identifying students at risk and targeting dropout-prevention interventions.”

The brief says that states are well positioned to help build and align data systems to track and prevent dropouts because they are already required to do so through the No Child Left Behind and the Individuals with Disabilities Education acts. It also states that emphasizing the creation of these systems and “following through with strategic allocation of resources” can help states achieve their graduation rate targets.