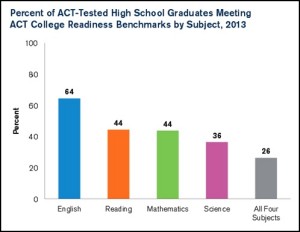 Only 26 percent of high school graduates from the Class of 2013 met all four ACT College Readiness Benchmarks, according to The Condition of College & Career Readiness 2013, released by ACT on August 21. As shown in the graph to the right, 64 percent of ACT-tested graduates met the English benchmark, compared to only 36 percent for the science benchmark; 31 percent of graduates did not meet any of the benchmarks.

“Once again, our data show that high school success and college readiness are not necessarily the same thing,” said Jon Whitmore, ACT chief executive officer. “Too many students are likely to struggle after they graduate from high school. As a nation, we must set ambitious goals and take strong action to address this consistent problem. The competitiveness of our young people and of our nation as a whole in the global economy is at stake.”

ACT’s College Readiness Benchmarks represent the minimum score students must earn to have about a 75 percent chance of earning a grade of C or higher in a typical credit-bearing first-year college course in that subject area. ACT research suggests that students who meet the benchmarks are more likely than those who do not to persist in college and earn a degree.

The Condition of College & Career Readiness 2013, which includes findings for every state, is available at http://www.act.org/newsroom/data/2013/index.html .