PRIMARY SOURCES: Three-Quarters of Teachers Say Implementation of Common Core State Standards Will Be “Challenging” but Are Enthusiastic About Changes Associated with Them

Rating
Nearly three-quarters (73 percent) of educators who teach math, English language arts, science and/or social studies in states that have adopted the Common Core State Standards (CCSS) believe the implementation of the CCSS will be challenging, but they are enthusiastic about the changes coming to their classrooms under the new standards.

Nearly three-quarters (73 percent) of educators who teach math, English language arts, science and/or social studies in states that have adopted the Common Core State Standards (CCSS) believe the implementation of the CCSS will be challenging, but they are enthusiastic about the changes coming to their classrooms under the new standards. This is one of several findings related to the CCSS contained in Primary Sources: America’s Teachers on Teaching in an Era of Change, results from a new survey from Scholastic and the Bill & Melinda Gates Foundation.

“Primary Sources is a reflection of the most pressing issues we are facing as teachers today,” said Naima Lilly, a math educator in New York City. “We need to include teachers in the ongoing conversations surrounding education, particularly on the tough topics, to determine what is actually happening, how it is working, and how we can focus on solutions. The teacher’s voice is imperative and I hope this report provides insight to leaders at all levels.”

Results from the survey reveal that a majority of teachers (57 percent) believe that the CCSS will be “positive for most students,” compared to only 8 percent who say that CCSS will be negative for most students; 35 percent say that the standards will not make much of a difference for most students. When broken out by grade level, elementary school teachers (68 percent) were much more positive about the standards’ impact on students than middle (52 percent) or high school teachers (41 percent). Teachers in classrooms where implementation is furthest along are most likely to think Common Core’s impact will be “positive” or “very positive.”

When asked what impact the CCSS will have on certain aspects of student learning, math, English language arts (ELA), and science and/or social studies, teachers in CCSS states believe the standards will positively impact students’ ability to think critically and use reasoning skills (74 percent), present ideas based on evidence (71 percent) and students’ ability to read and comprehend informational texts (68 percent). Only 2–3 percent think the standards will have a negative or very negative impact in these areas. 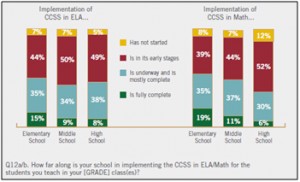 The survey results also reveal that CCSS implementation is slightly further along in elementary schools than in middle or high schools. As shown in the graph to the right, 50 percent and 54 percent of elementary school ELA and math teachers, respectively, say that CCSS implementation is mostly or fully complete, compared to 46 percent and 36 percent of high school ELA and math teachers, respectively.

According to survey results, 75 percent of ELA or math teachers in Common Core states feel at least somewhat prepared to teach the CCSS, compared to 59 percent in 2011. When asked which tools and resources they need in order to successfully implement the CCSS, 76 percent of teachers say they need additional planning time to find materials and prepare lessons, while 71 percent need quality professional development. Sixty-seven percent of teachers say they need ideas on teaching in an inquiry-based way to promote “deep thinking,” while 56 percent need access to more student-centered technology and digital content.

Primary Sources: America’s Teachers on Teaching in an Era of Change is the third in a series of teacher surveys. The first occurred in 2009 and contained views on U.S. schools from more than 40,000 teachers while the second took place in 2011 and asked 10,000 teachers about the teaching profession and the view from the classroom. The latest version is based on a survey of more than 20,000 public school teachers conducted in July 2013. In addition to the findings on the CCSS, the report includes teachers’ opinions on the rewards and challenges of teaching, teacher evaluation systems, parental involvement, and more.

Complete results from the survey, which include state-by-state results, are available at http://www.scholastic.com/primarysources/index.htm.