Rating
“It is absurd that under current law, a child can be considered homeless by one federal agency but not by another,” said Bob Wise, president of the Alliance for Excellent Education and former governor of West Virginia. 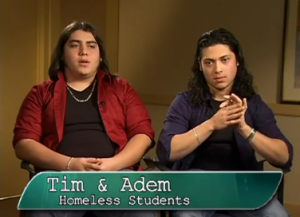 Nationwide, approximately 715,238 homeless students are caught in this bureaucratic gap between the Department of Education and HUD, where the former classifies these young people as homeless, but the latter does not. As a result, many homeless students do not have access to HUD services, including shelter, permanent housing, case management, substance abuse treatment, and more. (Click on the image to the right to hear homeless students tell how they became homeless and describe the challenges—educational and otherwise—that they face in their high school careers.)

“It is absurd that under current law, a child can be considered homeless by one federal agency but not by another,” said Bob Wise, president of the Alliance for Excellent Education and former governor of West Virginia. “Homeless students face enough barriers in their pursuit of a high school diploma without having to jump through federal hoops. It’s time to cut through this federal bureaucracy and ensure that all homeless children have access to the services they need and deserve.”

Under the Department of Education’s definition, children, youth, and families who have lost their homes and are staying temporarily with others or in motels are considered homeless. These children are often referred to as the “hidden homeless” because they are not as visible as adults living on the streets, but they are just as vulnerable and in just as much need of services.

HUD’s definition of homelessness largely ignores children and focuses primarily on single adults living on the streets and in shelters. In order to be considered homeless by HUD, a youth or family temporarily staying in a motel or with others can stay there for no more than fourteen days and must be able to prove the temporary nature of their stay in writing.

The Homeless Children and Youth Act (H.R. 32), which is currently pending before the U.S. Congress, can close this gap by aligning HUD’s definition of homelessness with that of the Department of Education. Under the legislation, children, youth, and families could be verified as homeless by four different programs: Head Start; Education for Homeless Children and Youth program administered by public schools; Runaway and Homeless Youth Act program; and early intervention programs under the Individuals with Disabilities Education Act.

“Under current law and regulations, between 41 percent and 91 percent of the homeless students in each state are ineligible for much-needed services from HUD,” Wise said. “The Homeless Children and Youth Act would remove this barrier and give students and their families access to services they desperately need.”

The complete analysis is available here.