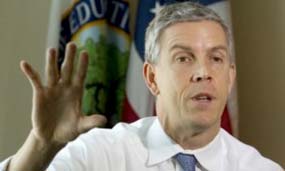 Congress ordered the U.S. Department of Education to make the School Improvement Grant (SIG) program much more flexible for states. And under final regulations for the program, slated to be published today, states can cook up their own turnaround interventions for low-performing schools using federal SIG dollars and submit them to the U.S. Secretary of Education for approval. Education Week

New federal interagency partnerships will bring hands-on Science, Technology, Engineering, and Math (STEM) learning opportunities to high-need students during after-school and out-of-school time. These partnerships will create opportunities for students to engage in solving real-world STEM challenges with scientists and experts in their field. eSchoolNews

Teach for America, the education powerhouse that has sent thousands of handpicked college graduates to teach in some of the nation’s most troubled schools, is suddenly having recruitment problems. For the second year in a row, applicants for the elite program have dropped, breaking a 15-year growth trend. The New York TimesThe D.C. Council approved more than $40 million last year to meet the needs of students who are considered at-risk in D.C. Public Schools. And according to a new category being used in the District, some 40 percent of the city’s public school students are considered “at risk.” The Washington Post

Kansas Gov. Sam Brownback has announced additional budget cuts — including cuts to public schools and higher education — to help keep the state solvent through the current fiscal year, which ends in June. The Kansas City Star

In a report released this week by the Alabama Department of Education (ALSDE), Montgomery Public Schools in Montgomery, Alabama had seven schools and one center that were ranked as failing, according to guidelines set out by the Alabama Accountability Act. Montgomery Advertiser

Carl Heastie, the new speaker of the New York State Assembly, will be able to decide what bills get considered and negotiate the details of the state budget, which sends more than $8 billion to New York City schools annually, but some argue that Heastie’s record on education is sparse and, at times, conflicting. Chalkbeat NY

The Tennessee Education Association (TEA), Tennessee’s largest teachers union, filed a lawsuit Thursday against state and district officials in Nashville and Anderson County, stating that the use of test scores to judge teachers of non-tested subjects is a violation of those teachers’ rights. Chalkbeat TN

Dr. Kirk Lewis Career and Technical High School has deployed adjustable standing desks in a freshman geography class which allow students to change the height of the desktop for sitting or standing or for using different technologies in an effort to support project-based learning and open collaboration. THE Journal