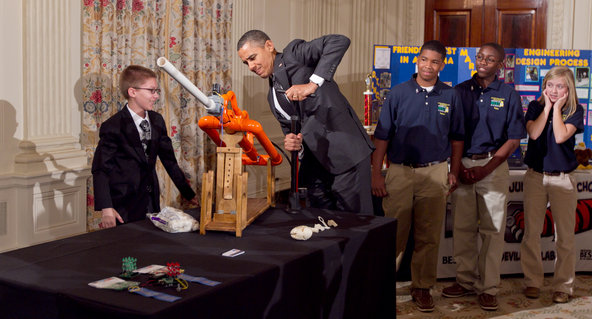 During a science fair held at the White House yesterday, President Obama declared that the nation was in need of more “tinkerers and dreamers.” According the New York Times, the President announced new federal and private-sector education initiatives to encourage student engagement and development in STEM curriculum.

Principals and assistant principals in Tennessee have traveled to thousands of classrooms in the state to spend at least an hour annually observing and rating every teacher, guidance counselor, social worker and librarian. But as the Hechinger Report notes, the new methods of teacher evaluation have come across a bump in what will be a long road ahead.

During an economic downturn, post-secondary education can be the determining factor for whether your job may be on the chopping block. The Huffington Post reports that for many in the United States, the two years since the end of the recession have been worse than the downturn itself as many with only a high school degree are laid off during weak recovery.

Detroit is imploring its parents to get more involved in the academic welfare of their children. According to NPR, the city’s school system is trying to get parents to be more engaged with their children’s education in an effort to boost achievement and stop an exodus of families from the district.

New York City in the last decade has launched approximately 500 new public schools. This has been a part of Mayor Michael R. Bloomberg’s efforts to close or revamp failing schools in order to replace them with smaller ones. As the New York Times chronicles, one small school is excelling despite being within a larger school that is struggling.