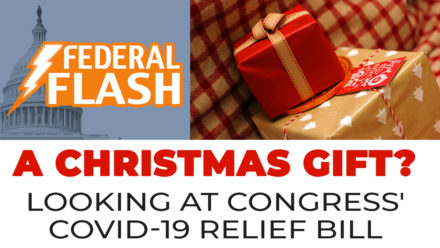 Congress is close to a deal that will fund the U.S. Department of Education (ED), keep the federal government open, and provide additional resources to address COVID-19. Plus, on the fifth anniversary of the Every Student Succeeds Act (ESSA) being signed into law, the Alliance for Excellent Education (All4Ed) released new data showing what happens to historically underserved students When Equity Is Optional for states.

Funding for ED and Other Federal Agencies

Funding for ED and other agencies has been on autopilot since October 1 because Congress has yet to pass a spending bill to fund any federal agency for the year. The federal government is operating under its second Continuing Resolution, which temporarily maintains funding at last year’s levels. This stopgap expires December 18. However, it’s likely to be extended for a few days to give Congress more time to finish two things before heading home for the new year:

What should we expect in funding for ED? Not a lot of surprises. Most programs will get the same amount of funding that they received last year, or something very close to it. The largest increase could go to Title I, but any increase will likely be very modest—less than 1 percent. Last year, Title I received nearly $17 billion. This year, the House of Representatives proposed a $161 million increase, while the Senate proposed a $125 million increase. We’ll find out final numbers for Title I and other programs when the bill passes, likely this weekend or early next week.

What’s Next for COVID-19 Relief?

Part of what’s holding up the spending bill is that congressional leaders also are working to finish a deal on COVID-19 relief. As we’ve covered before on Federal Flash, negotiations have been underway since the Coronavirus Aid, Relief, and Economic Security (CARES) Act passed in the spring. Unfortunately, policy and funding disagreements, on top of election-year politics, have prevented any bill from becoming law.

Talks reignited this month after a bipartisan group of senators developed a COVID-19 relief package on their own. Their proposal won’t get a vote, but it helped kick-start the development of a bill that might pass.

The bill being negotiated now has a total price tag of about $900 billion. That’s far less than the $2.2 trillion Health and Emergency Recovery Omnibus Emergency Solutions (HEROES) Act passed by House Democrats in October, which was more than $1 trillion less than the original version of the bill from May. However, the revised HEROES Act proposed more funding for education, including $175 billion for school districts and $12 billion to expand high-speed home internet access. Senate Republican proposals have had a lower price tag and less funding for education, weighing in at $70 billion for K–12 schools.

The bipartisan Senate proposal provides less funding for K–12 education than any of these past efforts: $54 billion. Funds would be distributed to states and districts based on the Title I formula, just as they were under the CARES Act, but they would not be conditioned on schools reopening, as proposed by Republicans. Although the funding level is disappointing for those who have been calling for federal support for education over the past several months, it would be four times the amount of K–12 funding in the CARES Act. The bipartisan framework also includes $3 billion for home internet access through the E-rate program. This is far less than the $12 billion included in the HEROES Act, but an improvement over the CARES Act, which didn’t fund home internet access at all.

To be clear, these details reflect the Senate bipartisan agreement. A final bill is being negotiated by the House and Senate leadership. It’s likely to resemble the bipartisan framework but details could differ.

A final bill also will have to deal with a few contentious policy issues. On education, negotiators will have to determine how much funding is provided to private schools and how it’s allocated. On broader issues, Republicans have opposed funding to shore up state and local governments, which could help prevent cuts to local school budgets and has been a top priority of Democrats. Republicans also have sought liability protections that have been opposed by Democrats. It’s possible issues like these will be taken off the table so that a final deal can be reached. We’ll keep you posted.

When Equity Is Optional

With support from the W.K. Kellogg Foundation, we analyzed the first year of ESSA implementation in ten states. We found that Black and Latino students are much more likely to receive a poorly rated education than White students and are overrepresented in low-rated schools and underrepresented in high-rated ones. For example, Black students in Mississippi are seventeen times more likely to attend an F school than White students.

This was true in all states, but what varied was state leaders’ responses to these inequities. In some states, low-performing schools were far more likely to be identified for support and therefore eligible for extra funding under ESSA to improve. Worse, many of the lowest-rated schools were overlooked for support entirely, including high schools with low graduation rates. In other words, where a student lives matters a great deal when it comes to ESSA implementation. For example, Mississippi failed to identify 43 percent of its F schools for either comprehensive or targeted support, while Florida identified all of its F schools.

With federal accountability from last year paused because of the pandemic, All4Ed calls on state leaders to use this opportunity to create more equitable accountability systems and to measure student learning this spring to ensure that students do not lose more ground. We also joined with twenty other education and civil rights organizations in a letter to the incoming Biden administration calling for ED to increase its oversight of state accountability plans and take other steps to address inequities exacerbated by the pandemic.

This blog post represents a slightly edited transcript of the December 17 episode of Federal Flash, All4Ed’s video series on important developments in education policy in Washington, DC. The podcast and video versions are embedded below. For an alert when the next episode of Federal Flash is available, email alliance@all4ed.org.